Our Paul D. Miller Marathon
DJ Spooky Lecture at W+K, Friday
Listen to mix-CD DJ Spooky gave us a lecture, Friday
ReBirth of a Nation, Friday
Midnight at The Works (pinch hitting for absent Tokyolab), Friday
Noontime chat with Miller et al, Saturday at PNCA
Multnomah County Library to check out Rhythm Science
–posted by Lisa Radon
“Swim like an ocean in the fish of the media”
Paul D. Miller lectures the way he works, pulling from numerous sources, making references both obscure and un- from Eadweard Muybridge (who in early 1900s pioneered stop motion photography) to Joseph Beuys, to Italian Futurist, Luigi Russolo, author of the Art of Noise. His non-linearity and web-like thinking, jumping from node-to-node, making connections, tangent-ing, looping, is the ideal analogue to his music and method of composition. 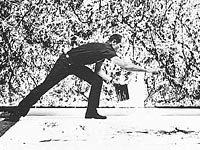 Miller talked about his work as play, the media as his palette, as dealing with our collective memory and as a response to data overload…rather than being a passive consumer of sound, he receives, remixes, plays in making his time-based sonic collages. He talked about content vs. context and his primary technique of recontextualizing his found sounds.
Miller referred, in both lecture and chat to the notion of “self as cipher.” A cipher is an algorithm that transforms regular data into a coded set of data. He works both ways decoding and re-encoding simultaneously through the singular algorithm/filter of the Miller brain.
It was thrilling to get a look at his library of sounds. At the lecture, we could see some of the sound files on his hard drive projected onto the giant screens at W+K, with sound files ranging from Alan Lomax to Pierre Boulez, Missy Elliott, and Chuck D and Slayer drummer, Dave Lombardo with whom he’s working on his next project. At the chat, he passed around records including those by Johns Cage and Coltrain, the Talking Heads (with a Rauschenberg cover), Sylvester, Jean Michel Basquiat, and Timothy Leary.
I’m loathe to waste a word on it, but there was this ridiculous moment during the noontime chat, one of many Me-moments courtesy of Daniel Roumain, in which he attacked the notion of collaging, of creating from found sounds as an inferior method of composition. “I have to sit down and write from scratch,” the composer huffed, completely ignoring that what DJ’s do is simply to foreground the fact that any creation is made from the samples the brain in its mysterious way collects, rearranges, stores, and retrieves daily…that DJ Spooky as composer meets this original/received material question in a very honest way, being okay with shades of grey of originality, rather than having to insecurely “protest too much” about the value of the original composition.

In some ways, I’m sure that this musician’s attitude (Roumain asked what would happen if we put Spooky in a room with a piano—note: Miller plays both contrabass and drums) is why DJ Spooky has more in common with the rest of the performing and visual arts world than he does with music. He referenced Duchamp several times, talking about the copy or mass-produced vs. the original in art. In spite of his success as a maker of records, it makes the most sense to place his work alongside that of Robert Rauschenberg, to Tristan Tzara’s “L’amiral Cherche Une Maison à Louer” (click hereto download and this three-voice, three-language, simultaneous poem), and others with whom he shares technique, aim, and intellectual space like William Burroughs and Joseph Beuys.
About the film. Considering that Miller’s stated aim is to, “use DJ technique to interrogate history,” to fold the film and its racist message back in on itself, to make of the film its own critique, I wanted more. It’s such an ambitious project to cut and mix both video and sound on-the-fly as well as take on Birth of a Nation and recreate it in a critical way. Miller used selection and repetition of footage for emphasis, overlayed a few visual elements—circuit boards, a woman dancing, Centipede—but only rarely and w/ digital imagery, more a mark of the maker (Spooky) than a comment on the footage. Maybe it’s because the material itself is so ludicrous at this point that it doesn’t need any manipulation to be seen for what it is. In some ways, if Spooky had just created an original soundtrack, the piece might not have been dramatically different, which means that there is still work to be done in the collaging of the film.
Other important cultural note: For those of us who got to see the MC Battle between Run D.M.C and Kool Moe Dee and Special K of the Treacherous Three from a television show called Graffiti Rock—a hip-hop American Bandstand from the early 80s—yes, that was a bleached blond Debi Mazar in her best New Wave attire bopping in the background.

Now, I know there was a great degree of overlap in that era between club world and burgeoning hip hop scene, so it’s not that surprising that Mazar would be there, but give it twenty years and Mazar’s subsequent career and it becomes this great moment of (inadvertent) contextual juxtaposition. It took my brain a minute or two to check files, ID Mazar, make sense of it.
It’s that kind of messing-with-my-personal-contextual-system (that has its own built-in glitches and blips and miswirings) that makes DJ Spooky’s sonic compositions so compelling…the Mazar moments and those extended periods during which the making sense processing has to be put on hold, as with the experience of any form of experimental art…