Looking for your Twin in Melbourne

Posted by Erin Boberg
Performance Art Program Director / Co-Curator TBA Festival, PICA
When traveling, you often find yourself looking for your twin. If you’re from Portland, you might think it would be easy to find your twin in Melbourne. Like the Willamette, the Yarra River flows through the wine country and through the center of the city. The neighborhoods are full of small independent businesses and coffee shops. The weather is mild and the pace of life is easy. You play a kind of matching game as you walk through the city: This is the Seaplane of Melbourne, this is the Half and Half of Melbourne, this is the Hawthorne of Melbourne, this is the Pioneer Square of Melbourne.
It might just be the weather, the grid system, the wildlife, the weather, the love of art, the love of festivals, the cafe society, the society. But it suits you.
For seven nights in Federation Square, Lone Twin (Gregg and Gary) arrive on their bicycles, having ridden around the city all day, collecting stories, and developing seven new minutes to add to their performance. Each night the crowd gathered on the steps gets bigger and bigger, as they raise a series of toasts – To the first day in a new city! To Sunday! (which makes you feel like crying) To Sunday! (which makes you feel like laughing) To the woman who controls the traffic! To calling up strangers! To saying “where did you get my number?” To marriage! (I still love you) To going home! To saying goodbye! To saying “Ciao! “
You feel at home, especially because there are so many people you have just seen in Portland. This is the Ros and Kristy and Malachi of Melbourne, this is the MK and Cris and Molly of Melbourne, the David and Wendy and Justin and Guy and John of Melbourne. And sitting on the steps are hundreds of other people who you might come to know if you stayed here longer, people you would miss when you went home.
By the seventh day, you realize the cities are not that similar. Or they are only similar in that they are both so fiercely and proudly unique. They’re good cities to live in and good cities to leave. They’re full of good people caring for other good people. You and Gregg and Gary and everyone else from somewhere else are looking for your twins, but you don’t have one here or anywhere. There’s no one like you. There’s no place like here and there’s no place like home.
To going home! To if you lived here, you’d be home by now! To the love of festivals! To long lost friends! (I still love you.) To marriage! (I still love you.) To the sweet small beers! To the lanes! To Spring! To wishing you were someone else! To having some one to miss! To having it both ways! To lone twins! 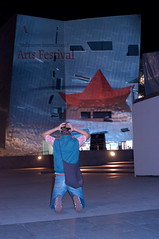