I have a problem- I always get goofy for loud mouth liberals- Schumer was my hometown representative and my first political crush – now I have one more reason to love Senator Chuck…lets just hope this one passes.
The New York Times
November 22, 2005
Senate Bill Lets Artists Claim Price for Gifts
By ROBIN POGREBIN
Living writers, musicians, artists and scholars who donate their work to a museum or other charitable cause would earn a tax deduction based on full fair market value under a bill just passed by the Senate.
Currently such work receives only a deduction based on the cost of materials unless it is donated posthumously by the estates.
The measure was approved as an amendment to a broader $59.6 billion tax relief bill passed by the Senate early Friday. It now goes to a House-Senate conference committee. The House version of the tax relief bill does not include the arts provision, but the senators who introduced the amendment – Charles E. Schumer, Democrat of New York, and Pete V. Domenici, a New Mexico Republican – said they were hopeful that the committee would support it. 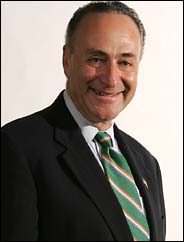 Under the bill, artists could donate their work during their lifetimes at full market value provided that it is properly appraised and handed over at least 18 months after it is created.

The provision seems likely to open the way for more acquisitions by cash-strapped museums. “It’s very important for cultural institutions and libraries to be able to be the recipient of these works of art that otherwise might go into private hands,” said Mimi Gaudieri, the executive director of the Association of Art Museum Directors.
“Especially for small to midsize institutions with modest acquisition funds, as a gift from the artists, it’s a great opportunity to enhance their collections,” Ms. Gaudieri said.
The donated work must be related to the purpose or function of the museum or charitable organization receiving the donation.
Mr. Schumer, a member of the Senate Finance Committee, said the measure would even the playing field for arts donors. “Right now, artists are better off waiting until after they die to donate their works to a charity or a museum,” he said, adding that the amendment “fixes that problem and treats artists the same as anyone else who works hard and wants to donate something to charity at the fair market or appraised value.”
Arts professionals described the measure as long overdue. “Artists donate to cultural nonprofits or other nonprofits, and all they get is the cost of their materials,” said Tom Healy, president of the Lower Manhattan Cultural Council, which represents arts groups downtown. “If you have a painting that’s worth $5,000, you may be able to deduct $20 for the canvas.”
As long as the work is physically tangible, it can be contributed as a deduction, said Robert L. Lynch, president and chief executive of Americans for the Arts, an advocacy group. “A score has value just like a painting,” he said.
Applying the provision may present challenges for the Internal Revenue Service, given that appraising a work of creativity is often a highly subjective process. “It’s a pretty new day in tax policy,” said Dean A. Zerbe, a senior tax lawyer and investigator for the Senate Finance Committee. “It has the potential for people to want to go back and expand it.”
He suggested that some professionals might seek a deduction for a product like a legal brief or a medical operation. “It’s something the house will have to look at closely,” Mr. Zerbe said.
The bill also comes with stricter rules for the qualifications of appraisers. “The public is now going to be made aware of what a qualified appraiser is,” said Fran Zeman, the former chairwoman of the personal property committee of the American Society of Appraisers. “It’s important for everyone to understand the importance of using someone who is qualified.”
Ms. Zeman said that noncash contributions to charitable groups are often overvalued. The Internal Revenue Service has grappled with the valuation of donations ranging from automobiles to frequent-flier miles.
Mark W. Everson, the I.R.S. commissioner, raised that issue in testimony last spring before the Senate Finance Committee. “Valuation issues are often difficult,” he said. “Overvaluations may arise from taxpayer error or abuse as well as from aggressive taxpayer positions.”