the long walk to the whitney

My recent trip to NY was a pavement-pounding whirlwind. I do believe Portlanders traveling to the “the city” during the first weeks of March were surely responsible for a significant boom in airline earnings. It was not unusual to run into a familiar face – Portland dealers, artists and collectors were out and about. What was all the fuss about?The Whitney Biennial, the Armory and all of the other shows and fairs riding these giants’ coat tails (PULSE, SCOPE, DIVA to name a few) were in full bloom.
The first day I headed to the Armory Show held in two massive yet underwhelming buildings perched on the edge of the West Side Highway. Like any trade show the Armory reeked of salesman. There was the unnatural red carpet more like a red sea than a starlet walkway, and there were the booths, crammed with wares and stares. The Armory did provide me with a whiplash look at a massive selection of International galleries, and at times some significant pieces. There were stories floating around everywhere of collectors sneaking in by any means -for a pre -preview just to get first pick. Because of this heated market -dealers were not hiding the best work it was right there out in the open. Equally telling was the proliferation of emerging work as all of the “under represented” artists who are currently featured in the Whitney’s big show found themselves over represented in almost every cube in the fair. Because I was hoofing it fast it was all I could do but scribble a dozen names in my notebook while walking the mile long hallways. Some favorites included Rachel Harrison’s architecturally impossible paint covered blocks at Greene Naftali, similarly thick were Jo Jackson’s plaster and wax mini monuments at Jack Hanley and Justine Kurland’s new photos taken while on residency last year at PICA were lush and harrowing and made me a little homesick. 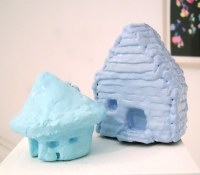 Jo Jackson
Next up was the Whitney Biennial. The reports are true. The show is a mess. Contrary to the word on the street and all over the art blogs I thought the mess was a beautiful one. I’m sure you have seen all the pics, hoards of looky loos peering through holes cut in the gallery walls. 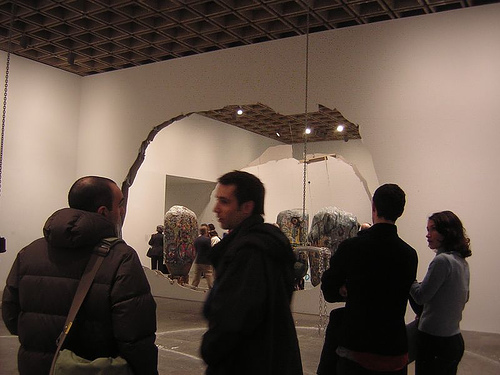 Whitney Walls
There are piles of things in corners, more flash, folk, glitter and trash than ever before. This is a show that takes time to look at. If you just glance around it seems all too much. Waiting for the elevator I wanted to lean on Aaron Young’s giant fake rock with the words “locals only” scrawled on it. 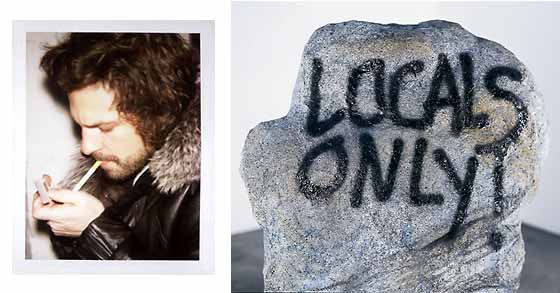 Mr. Young and his rock.
Once up on the top floor I spiraled down giving everything the once over, then I stopped by the front desk to pick up the audio tour headphones. If you are thinking of visiting NY to catch this show I highly recommend taking advantage of this free resource. While I often debate the usefulness of wall tags, contextual blabbering and a guided experience I found myself addicted to the peace it afforded me (once the headphones go on the crowd disappears) furthermore the audio was jam packed with valuable artist commentary. My second trip around was much more careful. Four hours later I felt like I was a time traveler, many of the artists works read like post apocalyptic relics. Certain things stood out: Matthew Day Jackson’s Conestoga wagon rode over a florescent tube rainbow an electric promise of something better if we only could just get there. 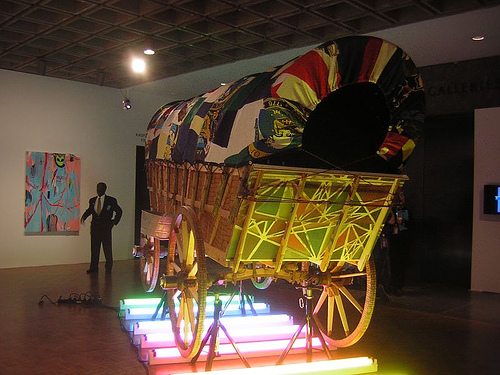 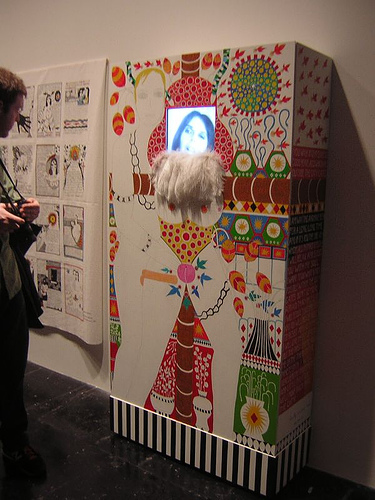 Dorothy Ionnone
Deva Graf’s installation with mirror, sand and towers with peering clay busts made you lean back, crouch down and stand on tippy toes. 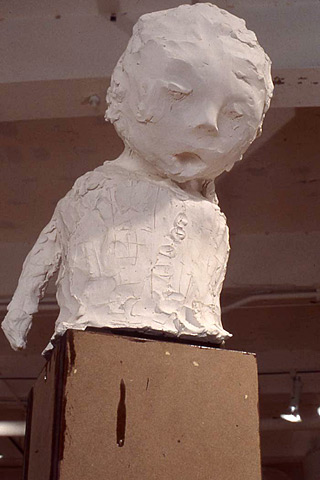 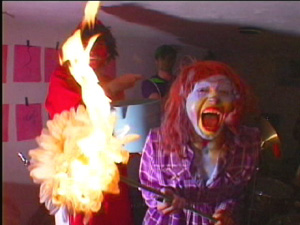 Ryan Trecartin
Sturtevant’s meticulous Duchamp homage and most of all a single panel on the Peace Tower, which read “We Can Disappear You”. If this show were a time capsule containing the stuff of right now the it would be right on. 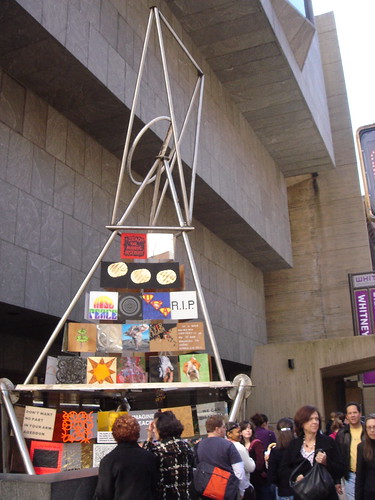 Peace Tower
The next day I walked Chelsea. With the selling pressure point lifted off this district and for one weekend located at the Armory, many of the dealers took the opportunity to mount major installation work and video projects in their spaces. Nicole Klagsbrun carpeted her whole gallery with plush grey carpet for John Pilson’s surprising solo show of four video installations dealing with how we communicate and what we obsess over. James Cohen presented Trenton Doyle Hancock’s massive paintings, and a selection of prints that made me believe in etching again. 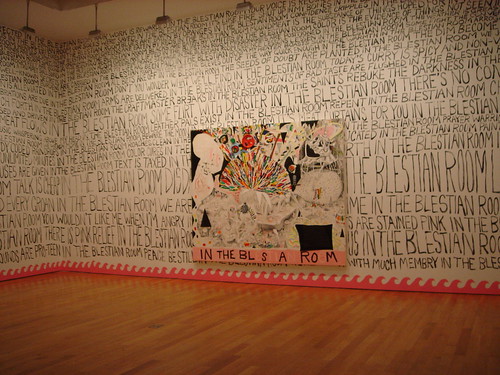 Trenton Doyle Hancock
Alfredo Jarr’s new film Muxima had Gallery Lelong turned into a theater and Gallery 303 had new work by Inka Essenhigh which although significantly bizarre were undeniable if only for their masterfull execution. 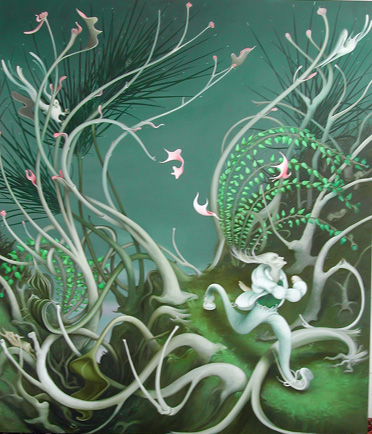 Inka Essenhigh
Amongst all of this stood a still wave, Tara Donavan’s sea of plastic cups at Pace made me stand still for the first time all week. It was truly epic! 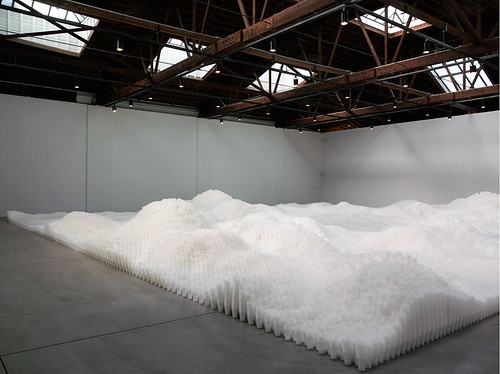 Tara Donovan
An opening at Esso introduced me to the work of Larry Bamburg in which a giant paper mountain took over one corner and was circled by a cluster of fake flies moving above (set in motion with the help of an elaborate pulley and fan system) and in the next room a menacing swarm of faux gnats a formed a cloud both suspended and “alive” in the middle of the room. Next-door Cao Fei’s opening was a true scene. Videos screened on overturned Chinese restaurant tables, and a stage built out of Chinatown signage for the rap group Notorious MSG moved spectators into the realm of spectacle. 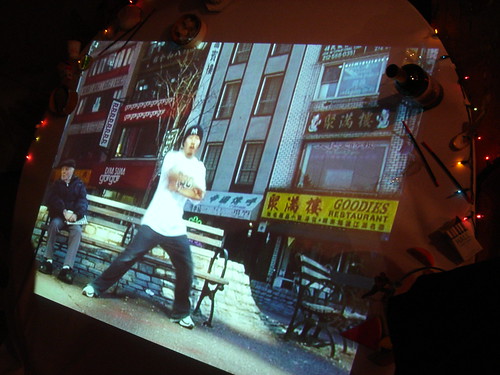 Cao Fei
The next day I was off to Long Island City to visit PS1 a former school turned cavernous contemporary art haven. The much-hyped show of 13 Chinese video artists fell flat except for the work of the aforementioned Cao Fei whom was also prominently figured here (some of you may remember her Cos Players piece from Jeff Jahn’s Fresh Trouble show). The rest of the museum scored high with a two story assemblage by Jessica Stockholder, insanely beautiful silver prints by Peter Hujar, 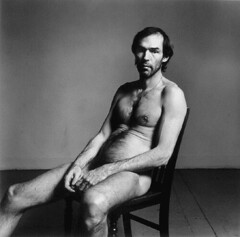 Self -Portrait 1980 Peter Hujar
the cinematic pranks of Sarah Greenberger Rafferty and my favorite piece of the trip Magical World by Johanna Billing in which a group of Croatian school children rehearse the 1968 Rotary Connection of the same name. 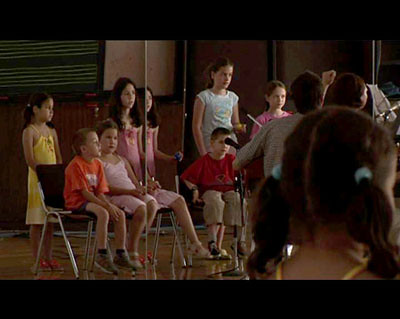 Magical World Johanna Billing
Next stop was a trip to DUMBO for a studio visit with Malia Jensen (her new work will be shown in Portland at Elizabeth Leach Gallery in May) and then back over the bridge to White Columns for their closing party and a nightcap at Gavin Brown’s gallery/bar passerby. 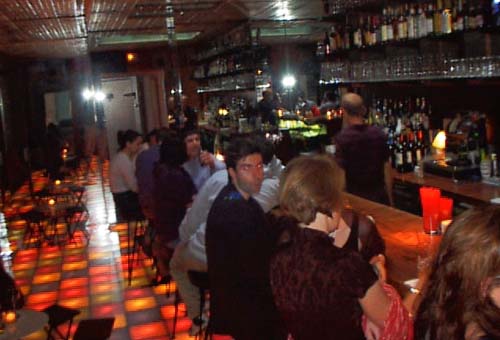 Passerby
The visit was equal parts exhausting and inspiring. Lots of looking elicits lots of thinking and this jaunt was a reminder that whatever city you are in right now art is waiting to be found and is always worth the trip.
Kristan Kennedy