By now you might have heard that on most Monday nights you can find an artist at the Fifth Ave. Cinemas, speaking to a diverse crowd about their work and their ways. Curated by Harrell Fletcher, these lectures are free and everyone is invited. Last weeks offering brought out a “star” studded crowd to see Jim Drain. I could be wrong but I think he is the first artist in the series to have his name grace the marquee? 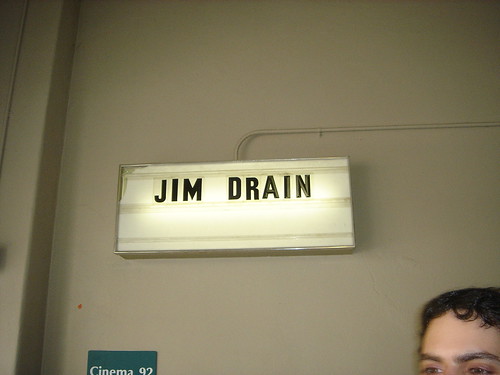 Formerly of the rambling knit clad noise band / art collaborative ForcefieldDrain was one of the members of Providence Rhode Island’s Fort Thunder a drawing/performance/costume party/home/studio/rock venue. Both were catapulted into the collective art consciousness after Forcefield’s inclusion in the 2002 Whitney Biennial
Now the knitwearis off the band and on Drain’s sculptures. At times they confound -is it a funny looking monster?, a giant bong?, a firecracker? – or all of those things at once? but most of all they leave my jaw hanging open in awe. 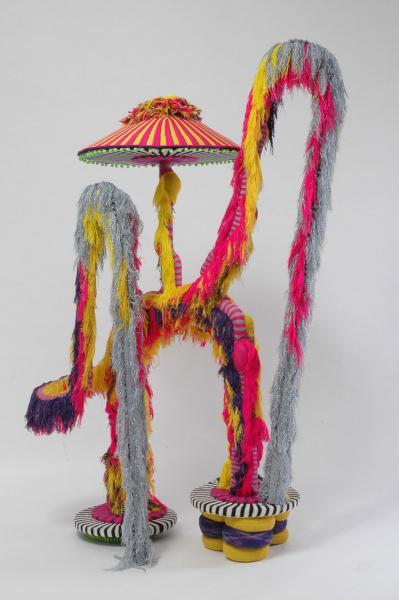 I say NOT BORING!!!!
Decked out in a cute/disturbing heart covered sweatshirt 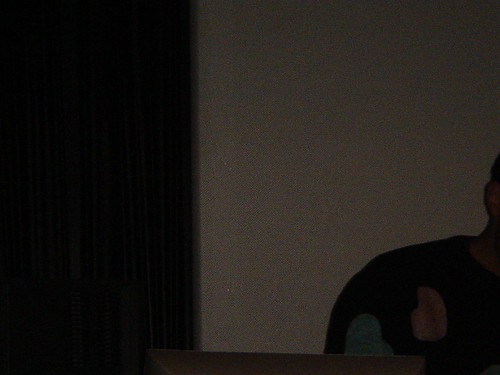 its hard to take photos in the dark…
Drain started off the night by treating us to some videos – including an undulating rainbow by Takeshi Murata and found animation featuring escalating battles between a poop (yes I said poop!) powered villain and his gullible victim. 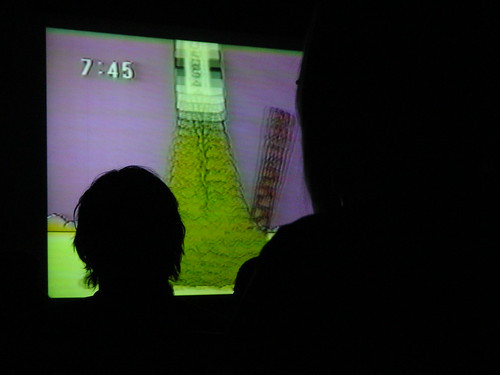 a cartoon turd rocket
Then came a Forcefield piece with three hooded drones staring down a fire in an oil barrel. This was the most captivating of the three- and significant to Drain who commented that he likes the tension and aggression set up by having to watch the piece and the annonymity that both his costumes and his Forcefield alias afforded him.
When the lights came back on Drain started in on his lecture – more ramble than academic posturing he quickly dismissed his aforementioned sculptures by flying through the slides and muttering that they were “boring, boring boring”. He revealed he is a bit nostalgic for his more performative and collaborative projects 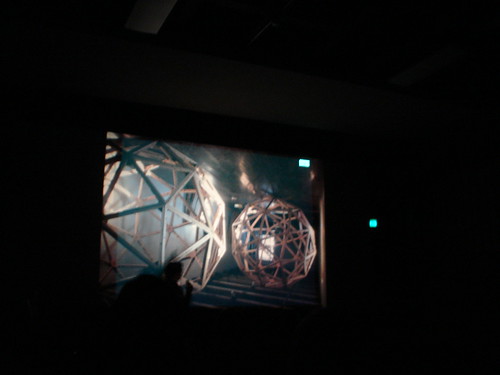 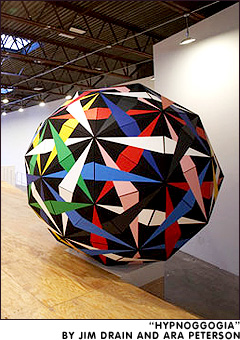 He even went so far as to suggest that perhaps performance is a more expressive and accessible art form. His uncomfortableness speaking to his own work was frustrating to some- and the audience started to call out for information. Inquiries lead Drain into more detailed discussion – and ranged from “how did you do that” (he uses a knitting machine) to tricky questions about what success brings and what his feelings were about the proliferation of Fort Thunder copycats. (He feels uncomfortable stating that he and/or forth thunder is responsible for inventing anything)
His answers and his lecture as a whole were awkward, endearing, frustrating and most of all human.
“Artists can no more speak about their work, than plants can speak about horticulture.” Jean Cocteau
What is it that we expect artists to say? Most people I spoke to afterward-expressed frustration that Drain did not reveal passion about his work did not get theoretical about his practice and did not clue us into some deeper meaning. I can only speak for myself when I say what these lectures have taught me is that our expectations of being entertained or having our own practice or theory justified by artists often hinders our experience – and that even little blips of coherence can lead to generous and genuine insight into an artists work.
The fact that we want more, better, faster and perfect seems indicative of a haunting question. Is the academic expectation that an artist should be able to talk (in art speak) about their work or that they need to deliver a lecture in a prescribed way- realistic? necessary? – anymore interesting than letting someone just be? or letting the work be?
I don’t really want an answer to any of these questions, I just want to keep learning by listening, debating when moved to do so and most of all to remain open to visiting artists sometimes challenging voices. How about you?
Listen Up! at the PSUMNLS (PSU MONDAY NIGHT LECTURE SERIES)
Most Mondays
7pm
FREE
Fifth Ave Cinemas / SW Hall of SW 5th Ave.
Next up is Bill Daniel- get notified of future lectures by signing up for emails right here.
Kristan Kennedy