One of my favorite PICA lectures last year was Hans Weigand and Raymond Pettibon. More theater than theory – these friends, band-mates and killer artists – are not defined by their chattering but by their work. 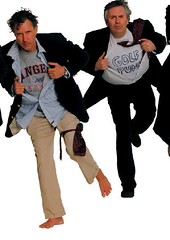 Crinkum Crankum – Pettibon and Weigand
Pettibon inflamed some people- we were accused of making him our “minstrel” and professors at local art schools were horrified that their students might be influenced by incoherence. There was however an equally powerful group in the crowd who worshiped him and were filled with glee that he was who he was. My favorite moment in the Pettibon “lecture” was when he flipped to a slide showing a drawing of a Dollar bill- there was a pained silence, and then a shuffling of the feet, and he said- “This is a swastika (pause pause – really long pause) Oh, I mean a dollar bill”.
His look doesn’t matter: Everyone loves Raymond
The reluctant Pettibon shows up at his opening in dirty clothes. But he’s a star in the art world.
By James Verini, Special to The Times
April 15, 2006
There are two types of people at a typical Raymond Pettibon opening. One type is drawn to the epigrams and discomfiting punch lines buried in Pettibon’s seemingly blithe drawings and paintings – serious folks who like to be seriously poked in the eye by art. Then there are the cheerier souls who come to see another beach bum play with cartoons.
Both were out in force at the Regen Projects gallery last Saturday for Pettibon’s new show, which is up until May 6. A mix of the grave and the merry sipped glasses of cheap white gallery wine and walked in slow circles around Regen’s big atrial room, some glowering, some smiling at Pettibon’s waves, trains and baseball players, which were pinned to the walls as though they’d just been torn from his sketchpad (his preferred style of presentation).
 
Pettibon loomed in the corner, looking as if he’d just been torn from something himself. Judging from his dirty white Jamaica tourist T-shirt, stained plaid-patterned trousers and sooty slip-on Vans, it might have been art or possibly something refuse-related.

Despite being a walking antithesis of the L.A. gallery scene, the diffident Pettibon has assumed rock star status on that scene. Fans come to his shows wearing Pettibon T-shirts. They carry his books around. They vie for his bygone-feeling lithographs like archivists fighting over early Beatles LPs. And though possibly the least self-promotional artist in this or any city, Pettibon has lately become a sensation in the art world at large.
He had a one-man show at the Whitney Museum of American Art last year and a spread in the New York Times Magazine. At the moment, he’s in Venice (Italy) scribbling on commission in a palazzo. After that he’ll be drawing something on the wall of a library in the Hague.
At Regen, well-wishers unacquainted with his stoical manner approached Pettibon and tried to talk to him as he stood against the wall, circumspect as an Easter Island maoi.
“Huh,” he said to one man, with a halting nod, in answer to the man’s enthusiastic drawn out point.
A woman who’d just stepped out of a Porsche on the street, wearing a black T-shirt that read “Dior Addict” in large white letters, approached Pettibon with a crazed look on her face and a monograph of his perched in her hands like a votive offering.
“Hi, Raymond, I love your work and I want- ” she began. Pettibon averted his eyes. As she talked, he drew a big wave in her book – he likes drawing waves, and surfers, though in his vision water often has an minatory aboriginal look -and signed it “Lovingly, Raymond Pettibon.”
The Dior addict left the gallery beaming and went outside to show off the book. Someone remarked on his intimate wording.
“Maybe I’ll give him my underwear,” she said, joking, though one got the idea she might have already done so.
In person, there’s nothing phenomenal about Pettibon (except perhaps his height). He looks at once younger and older than his 48 years, wears his hair like an abandoned seaweed farm and rides the bus to and from his mother’s house in Hermosa Beach, where he grew up.
It’s a gorgeous contradictory L.A. picture, like Gumby watching copulation or a nude dance scene in Abu Ghraib (both images in the show). Pettibon winces at compliments, even when they come from friends. Yet women now talk about giving him their underwear.
“He doesn’t have a lot of will to be a great artist – he just is a great artist,” Shaun Kaley Regen, his gallerist, said. “I don’t think things have changed very much for him. He seems like the same person I knew 15 years ago.”
In public, Regen looks after Pettibon in a warm, maternal way. After the show she held a large dinner party for him in the back garden of the restaurant Dominicks. About 60 collectors and curators, along with a few hipster hangers-on, stood around eating prosciutto and risotto balls. Pettibon hovered dutifully by the bar, drinking a bottled beer. Everything seemed OK. Suddenly, two women in string-strap tops took ahold of him and insisted that he stand between them for a picture. They leaned in and put their arms around him. He crossed his arms nervously and a surprised frown took over his face.
Somewhat inconveniently for Pettibon, whose real name is Raymond Ginn (his father used to call him petit bon, little good one; his brother is Greg Ginn of Black Flag fame), he’s a native son of L.A., so many Angelenos feel obliged to form an attachment to him. That the members of the Dior addict wing of his fan base often own his art doesn’t help.
“I have about 18 Pettibons,” one collector said, as though he were discussing ties or skateboards.
Meanwhile, Pettibon endures the social demands of his work, sometimes even gamely breaking the hermetic seal. In the corner of Regen Projects, before leaving for the dinner, a crowd had gathered around him as he stood against a door and squiggled little curios on invitations and odd scraps of paper. There was a wave. There was a tree.
A woman nearly as tall as Pettibon, with a very small dog in her arms, elbowed through.
“This is Stinky,” she announced.
Pettibon drew a dog.
“What kind of dog is it, Raymond?” he was asked.
“I don’t know,” Pettibon said with a sigh. “You’ve seen one dog, you’ve seen them all.”