From the bridges to the burbs

Before this year’s TBA kicked off with a blustery strum from John King’s guitar, Guest Artistic Director Mark Russell said a few words about the importance of bridges in this years festival. For the rest of the evening, his words seemed to have a particular resonance with the events selected. In King’s Extreme Guitar Orchestra, it was clear that part of this bridging, in fact, most of it, occurs within the performers and audiences. Just scanning the thirty-odd performers on the steps of the square, you saw delegates from more age groups, musical tastes, and styles than you would see at any other Portland event. Eckard’s poetic diatribe attempted to bridge the opposing banks of the Willamette with language and history. And the parade across the bridge, well, bridged the two sides of the river, finally bringing the active art scene of the Eastside into the fold. But the connectivity that TBA brings does not just end by crossing the rivers – the excitement surrounding this festival extends even to the westside suburbs. House-sitting for family near Beaverton hasn’t only meant an extra long haul to get in to the events, it has also meant that I’ve seen TBA posters gracing suburban libraries and grocery stores. This is the entire city’s event, and that city includes a lot of people who all are pretty stoked about the chance to overwhelm themselves with ten days of performance.
posted by patrick leonard 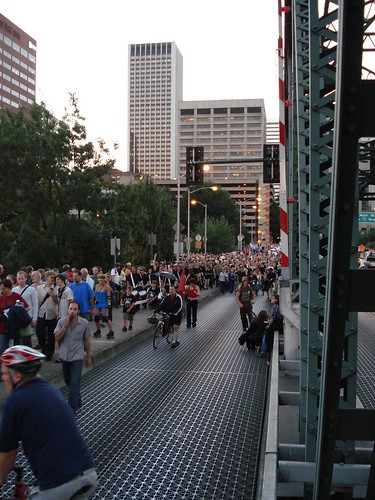