floating off (with photo)

On Thursday night hordes of people followed the marching band through the streets to the Hawthorne bridge and stood there, waiting for the art that was promised. The evening darkened, lights from cars flashed by on the Marquam bridge, the moon rose. We squinted up the river, looking for the art. David Eckard was going to float from somewhere and do some type of performance in some location near us. A few Coast Guard boats trolled around, as well as a bunch of kayaks. Was that part of the performance? Bells went off, and the bridge was raised to send a sailboat by. Was that part of the art? A lunking tourboat bumbled its way past us, glittering with light. Was that the art?
Finally a strange watercraft bobbed up from the distance, vaguely lit. The kayaks gathered and paddled formations around the vessel. Distant sound emitted from the craft. Every so often, we could catch a phrase or two from the bridge. This must be the art. 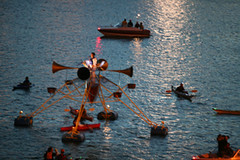 This and other photos from TBA opening night: Serena Davidson Photography
The air turned colder, and the sky darker. We peered at the water, waiting for a crescendo. A rumour spread through the dwindling crowd that fire was supposed to be part of the performance. We hung there in suspense, anticipating the bright and stunning finale. It did not come. Cold and irritated, we went off to look for more art.
posted by amber bell