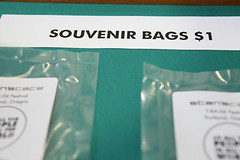 photo credit: Serena Davidson
“First up I’m English, so I have to apologize. I’m sorry for having to apologize but I can’t help it, it’s in my blood and my upbringing, I have been gifted with the extraordinary ability to be impossibly arrogant AND spend all my time apologizing.”
So began Stan’s Cafe Artistic Director James Yarker’s charming but scattershot lecture, Why be a professional artist? This hour-long speech combined practical guidance for aspiring art professionals with a brief history of Stan’s Cafe, while simultaneously satirizing the conventions of motivational speaking and affirming that a career as a professional artist is difficult but not impossible. Yarker originally created Why be a professional artist? for the graduating class of London’s Brunel University and he seemed to be aware that the TBA-specific version of the lecture could use a little finessing, commenting that, “On this occasion I am apologizing because I suspect this lecture may have got lost mid-Atlantic.”
Why be a professional artist? was most useful in providing background and context for Stan’s Cafe’s thoroughly engaging installation, Of All The People In All The World, in which statistical data is illustrated using grains of rice, one per person. Statistics are grouped together based on relationships both obvious (U.S. troops in Iraq with the population of Baghdad) and whimsical (number of people who eat at McDonald’s worldwide in the course of one day with the largest gathering of clowns ever). Individual grains of rice are used to represent influential individuals such as Rosa Parks, Condoleeza Rice (ha!) and Nikita Krushchev, while giant mounds represent such superorganisms as yesterday’s McDonald’s customers or the very slightly larger population of Spain. 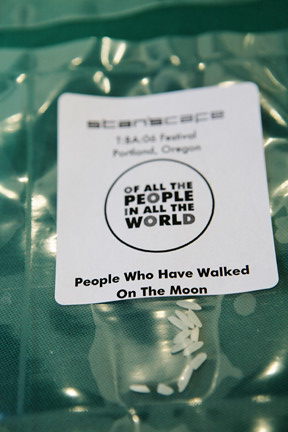 photo credit: Serena Davidson
Rice symbolizes humanity effectively because it can be formed into homogenous mounds while individual grains are still clearly visible. Spelled out in rice, the world’s prison population juxtaposed with the equally large number of Americans living in gated communities has a visceral impact that printed numbers can’t begin to equal. After seeing the victims of the Holocaust, the number of people who died as a result of the bombing of Hiroshima and the number of people living with HIV in Sub-Saharan Africa spelled out in rice, I steeled myself and approached the longest mound, fully expecting that the explanatory text would transform this pile of rice into the displaced dirt of yet another mass grave. But Stan’s Cafe was merciful. The statistic was shocking but funny and somehow comforting, illustrating exactly how much people “want to go where people know people are all the same.” 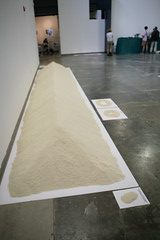 photo credit: Serena Davidson
Of All The People In All The World will evolve continuously throughout its run (Sept. 7 – Sept. 17). The smartly outfitted staff of Stan’s Cafe (pronounced kaff) are present throughout the installation and are open to suggestions for new statistics.
Jessica Bromer 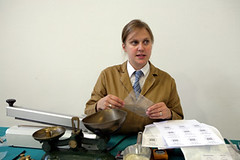