By Storm Tharp
There was a moment while listening to Jon King and the Extreme Guitar
Orchestra that a stylistic reminiscence overcame my already transfixed
mind. It has to do with how certain kinds of music sound like where
they come from. In very simplistic terms: how I associate country
music with cowboy boots or Billie Holiday with photographs of her
singing in dimly lit rooms, and the album “De Ja Vu” with the canyons
of Los Angeles, where I have rarely traveled – but somehow know. 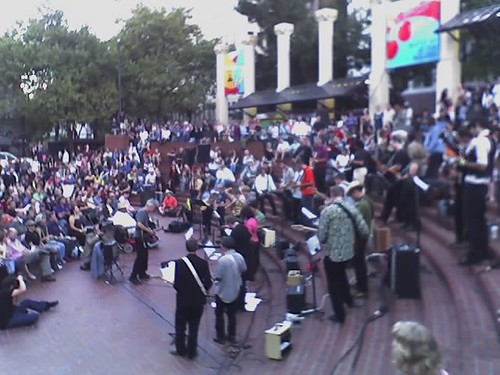 With John King, I would wander out of the meditative state and found
myself thinking about Kim Gordon and Laurie Anderson. Other times I
found myself thinking about the titles in “Koyaanisqatsi” and what
those things have in common. But in that one moment that I first
mentioned, the music became more clear, and I devoted my attention.
With my eyes opened but blurred, I began to think about everybody in
that square. And with each multiple chord and repitition, I found
that the music was in fact about us – about last night. And about
every single brick that we sat upon and the dirt that those bricks sat
upon – and I found myself very lost and contented by this notion.