“You are the only one…”
“You are the only … one…”
Softly swaying and repeating these words, Tahni Holt captured the complete trust of the audience that can only occur with the establisment of true intimacy between the performer and her crowd. She and Linda Austin both lulled the audience on Saturday afternoon into that important state of intimacy and, by turns, disrupted it to important effect in choreographer Deborah Hay’s Room . So much of the piece seemed to hinge on concepts of closeness and privacy, which, when you get right down to it, matter greatly in dance, but are often overlooked in favor of spectacle and flash.
From the very beginning of Hay’s piece, however, the dancers moved and spoke in ways that heightened the intimacy of the event to the point where every audience member seemed to forget that they were in a sold-out, standing-room-only venue. Tahni Holt began by entering the space and kindly asking the audience to lift a ribbon lying at their feet up to their laps. 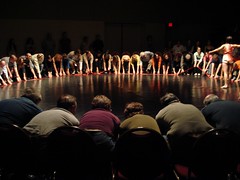 With this simple gesture, the performers implicated the audience members in the creation of a small and very personal space, where only one dancer at a time would remain for the duration of the show.
Inside this space, Holt and Austin each ran through a series of small movements that at times recalled watching a young child dance and sing along to music in the privacy of their room, while at other times felt like witnessing someone’s psychotic episode or seizure. While both moments were very intimate to witness, they were, contrastingly, quite endearing and rather discomforting.
To the credit of the dancers and the choreographers, Room balanced the intimacy of sharing a moment with another individual with the very different sort of intimacy that comes from having a minute solely to yourself in order to process your memories and experiences. One of these moments, for me, came as Austin covered her head, pulling her hat down. 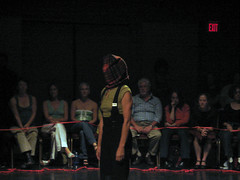 It was a movement that was coy at first, but one that gradually invited the audience to reflect on the very striking image it created. For me, that called up the raw collective, cultural memories of recent abuse scandals of Abu Ghraib – the now iconic images of hooded prisoners.
Some of these personally intimate moments, though, required the absence of the visuals of the performance. As the lights faded at the end of each sequence each audience member was left in the dark silence with nothing to refer to but themselves as they awaited the return of the lights and the start of the next segment.
In my mind though, what best revealed how successful the dancers had been in entrancing the audience was whenever Holt or Austin made a move that disrupted that former intimacy. At one point in the performance, Holt slowly drew her arms out into space and clapped, startling the man in front of her (and this was a guy easily three times my size, who didn’t look like the easily surprised type). He had so fully bought into the intensely personal, intimate moment of the performance that her clap broke his trance as he seemed to suddenly realize the staging of his present circumstance. Again, at the end of the performance, a small remote-controlled truck raced into the space created by the ribbon on the laps of the front row. Although this ended the piece by abruptly rupturing the sanctity of that rope barrier, even after Holt and Austin had taken their bows and left, the audience seemed hesitant to let go of that intimate space they had created and to set down the ribbon. 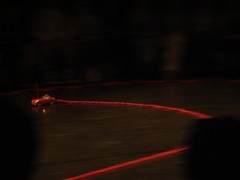 Room performs again at 6 on Monday, Tuesday and Wednesday at Brunish Hall in the Portland Center for the Performing Arts at 1111 SW Broadway.
posted by patrick leonard