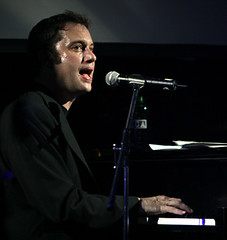 Caution: I am going to use the term “dildo-freak out” in this blog post. Do not be alarmed.
It’s telling that it takes two skinny white boys to equal one of R&B’s most storied, bizarre and sincere lyricist/performers. I’m not saying that they didn’t do a great job. In fact, the dislocation of R. Kelly’s lyrics and music onto the Works stage, probably did more to elucidate Mr. Kelly’s deviant and surreal lyrics than would listening to his best selling album R. on repeat while getting freaky in the Jacuzzi with some hotties. 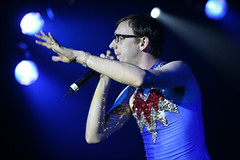 Still, questions come to mind: Was it the sheer power and sexual force behind Mr. Kelly’s lyrics that made Neal Medlyn shed his clothes so often? Was it really necessary to stab that teddy bear? Did anybody accept Christ during the gospel portion of the show? Just why is it “like Murder She Wrote when I start takin’ off ya clothes?” 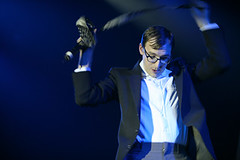 I applaud Mr. Medlyn and Mr. Mellman for their effort and I understand that sometimes the only way to demonstrate the joy, beauty and primal force of R. Kelly is through a juicy dildo-freak out. I mean, that kind of thing isn’t in my personal library of self-expression, but hey- To each his own. 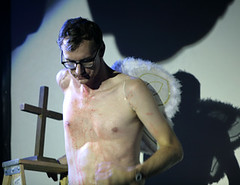 I was troubled and challenged by one thing though- Earlier yesterday, at the Creative Cities forum, a question was raised about how to bring more diversity into Portland’s creative community. I wonder if having a skinny white guy singing “You’re still my niggah,” from a ladder to the delight of a largely Caucasian crowd is really the best way to go about it. I’m just sayin’. It might be my liberal white guilt talking and its probably just me, but… I was a tad uncomfortable. What the hell. Its just art, right? Right?
posted by P.A. Coleman 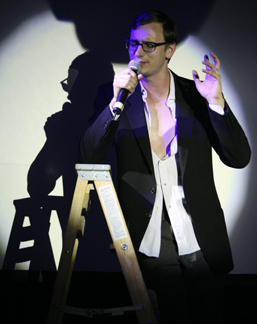