Ever since Saturday, I haven’t been able to clear my mind of the melody that keeps running through it, even as I write this post. It is a hauntingly beautiful and tender tune and, embarrasingly enough, it also happens to be the Rotary Connection’s 1968 song, Magical World.
Now, I am no fan of this psychedelic, bluesy-soul outfit, but Saturday happened to be the day that I saw Swedish filmmaker Johanna Billing’s captivating film of the same name – Magical World. 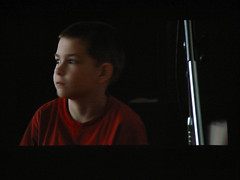 Billing’s film is a short burst of memories and poignant contradictions. Watching the elementary school-aged children sing and perform reminded me of my own experience in the fifth grade, having to sing another song from the same era: Three Dog Night’s Joy to the World. Neither my classmates nor I could decipher the lyrics (friends with a frog?), so we sang it much the same as we sing any other song; like Happy Birthday. In the film, the young boy’s lilting voice came through the instruments in that flat affect that reveals just how little of the song’s meaning he actually grasped. The only difference between his misunderstanding and mine is that I actually spoke the language in which I was singing.
The children Billing chose to film hailed from a school in Zagreb, Croatia, thereby introducing a whole complex of contrasts into the film. The dreamy harmony of the lyrics is at odds with their dry, droning delivery. The dilapidated, depressed views of the city are in striking contrast to the excitement and raw nerves of the kids performing in front of a camera crew. 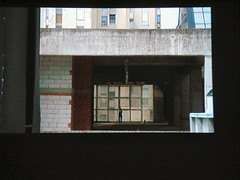 There is something about the children that, while I don’t want to call it universal, is certainly easy to relate to. If Billing’s film does make one thing clear to be universal, it is the pervasiveness of English throughout the world. Here, in a country only recently having entered the world economy and struggling after a series of tolling wars and ethnic conflicts, these children are singing an American pop song.
Taken together, it is a heady mix of politics, poetics and the sweetness of children simply trying to perform well.
It is touching, it is thought-provoking and it is only 6 and a half minutes long.
Catch Magical World at the Corberry Press, Building B throughout the entire month of September. And don’t miss Billing’s other films Thursday evening at 7 at the Whitsell Auditorium.
posted by patrick leonard