Oregon Department Of Kick Ass Hunts Us (with photos)

Looking too long until looking too long becomes looking again.
It started with a film made from old footage of small children facing a camera with their black and white collars and curls shifting in the gusts of wind. They are each looking at the camera like it is someone totally unknown. The camera stares and stares and the babes have no idea what to do – a fat little finger unfurls like a question. 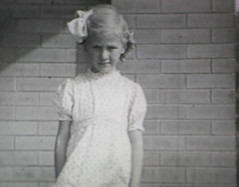 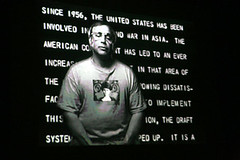 The next film documents a man shooting himself in the foot to avoid doing military service in Viet Nam. As the gun is trained on the foot and the trigger is pulled the audience turned away and faced into each others shoulders. After, the camera clings to a shot of the foot with a dark hole spouting a single thin arch of blood, rhythmically.
Then a film of footage taken from fighter planes during the war in Viet Nam and collected through the freedom of information act. Shot after shot of swooping in and away over unrecognizable land and sky, always centered on the orange target marks of the gun sight.
You don’t want to look anymore, you are pulling against it.
And then in Vanessa Renwick’s three screen video, Hope and Prey, the tension pushes us over. We watch wolves and crows and an eagle running and soaring and stalling as they hunt. The camera follows endlessly as the animals chase and flee. One shot of elk and wolf in full flight, muscles undulating as they beat through the snow, and then another shot, still running, a different vantage point. The thought of stamina. The music is so loud someone starts handing out earplugs. A crow with something in it’s mouth is swooping up, wing tipping, heading off, then around again, and up. A wolf and the bison stand looking at each other. The wolf is chasing the elk, again. They are standing breathing, then running behind a bank of snow. And then the abrupt ending that is not what you think. You suck in your own air.
This series of films made both the camera and the audience into characters related to each other through a relentless tension. The tension built a physical experience of connection with the films, even though it came from wanting to escape the howling stare of the camera.
posted by Publicwondering 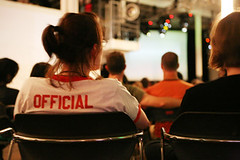 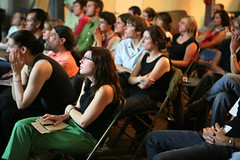