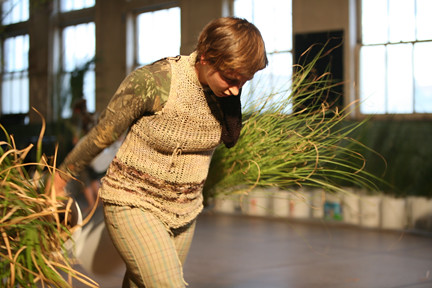 photo credit: Serena Davidson
The smell of mint pervades the room as the dancers swing buckets of wild grasses and play with large rectangles of ultra-light wood that whisper and swish to the floor. This is lovely, and I wish I could say as much about the performance as a whole, but the truth is it lacks cohesion and focus. I’m no dancer, but even I could tell that the dancers were unprepared and under-rehearsed. Someone else on the blog compared them to Tahni Holt’s Monster Squad, which is interesting; I was also comparing them, but noting that while Monster Squad dancers have a rough and hard-hitting movement style, they also have great skill and control over their bodies. In contrast, the performance I saw came across as clumsy and unpracticed. The dancers had no control over the evocative objects they were wielding, which could have been a choice– but expressing a lack of control is very different from actually having no control. In one case, a dancer sent a rolling square of grass across the floor, then ran to try and catch it before it rolled into the legs of audience members (she didn’t reach it in time). In another sequence, all five dancers kicked the aforementioned light-wood flats in the air while laying on their backs, except half of the time the flats fell awkwardly to the floor, and one flat finally broke in half. I am baffled as to why you would incorporate an element into your piece that you do not know how to work with, in the same way I’m baffled as to why you’d attempt to lift another dancer when you are not confident you can pull it off. There were several points where it was clear to me that a dancer had made a mistake and then morphed into another move to cover it up. Was this piece really trying to mimic the flight patterns of birds in non-native environments? What I saw was five people kind of moving like birds and rolling around on the floor a lot. And in one sequence donning tutus and sort of invoking Swan Lake. For no reason that I can fathom, except that swans are birds.
In its defense I will say that a good friend of mine loved it (and perhaps she will comment here as to what she liked). I remain baffled. It reminded me of high school students messing around in someone’s living room, pulling cool looking objects out of the basement and tossing them around, raiding their mom’s closet for costumes. I’m all for bringing work that experiments and doesn’t succeed, that attempts more than it can pull off, or that is working hard to appear unpolished and tossed off, but I couldn’t tell what this piece was going for. And honestly, I’m not sure what PICA was thinking when they added it to the TBA lineup.
But, again, the smell of mint in the room was nice, and the grasses in buckets set a nice tone. And Disjecta is looking good.
- Faith Helma 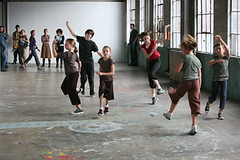 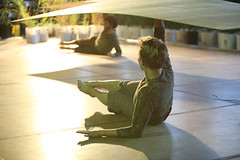