Is the Uninformed Perspective on Contemporary Dance Worth Giving? 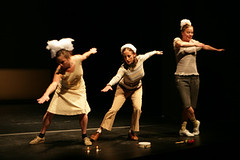 photo credit: Serena Davidson
These days, there are as many definitions of postmodernism as there are well, I was going to say Eskimo words for snow, but a little research revealed that 1. Inuit don’t like being called Eskimos and 2. They don’t have very many words for snow. It’s a myth.
Postmodern can mean “self-referential,” “appropriative,” “critical of the mythologizing of the role of the artist,” “from the era after which the succession of ‘modern’ movements in any particular creative field are commonly seen to have ‘ended’” etc. Sometimes, it’s just convenient shorthand for “weird and abstruse.” Instead of saying, “I just finished watching a performance in which a dancer wearing orthopedic shoes twitchily shook a tambourine and occasionally yelled out, ‘Next! Pony!’ or ‘Nest!Pony!’ I’m not sure which,” I simply told a friend who called me immediately after a performance of Deborah Hay’s Mountain, “I’ve been watching postmodern dance.” Which is not to say that I didn’t like this piece; I did. After responding negatively to Jennifer Monson/iLand as well as the more accomplished BeBe Miller Company, I wondered if I could actually like contemporary dance stripped of the eyecandy and high energy antics that helped me access Nature Theater of Oklahoma and Yubiwa Hotel.
When the woman next to me in the theater asked if I’d seen anything else I liked, I immediately replied, “Nature Theater of Oklahoma.” Asked to elaborate, I commented that NTO toyed with conventions in dance and theater by building a performance around props and movements from everyday life. “Like a spoof?” Kind of, but more complex, because it was also using dance to spoof everyday life. “That sounds delightful.”
Then the houselights dimmed, and a woman wearing what looked like a scrunchy made of cotton balls appeared before us, shaking maracas. I immediately noted the spare, beautiful stage lighting, which was employed successfully throughout the performance, the effective costuming choices, the skilled, likable dancers, the way that having the dancers make music to their dancing with maracas, tambourine and chimes was a clever reversal of the usual order of things, but more than anything else, I noticed myself noticing these things and waiting to see if I could become truly absorbed. Eventually, it happened. The turning point was an interlude in which one of the dancers changed into a grimacing troll-like embodiment of the human impulse to torture and kill others of our kind. It was grotesquely comedic, nauseating, but also provocatively pushing whatever buttons packed Romans into the amphitheater to watch people be devoured by lions. At that point, I started to sense the dancers sensing our reactions to them, to feel like they were dancing to me, not at me. It was a conversation, no less interesting because it was without words, except, occasionally “Nest!Pony!” or something equally bizarre. Eventually I became so absorbed in the performance that I didn’t need narrative aides; the dancers’ simple movements commanded my attention like twitching strings before a cat.
This post is getting long, so please bear with me. Or don’t–the review is over, but I wanted to comment on a comment on a post that was written awhile ago, but which I just got around to reading, about Nature Theater of Oklahoma. Self-indulgent? Probably. But isn’t self-indulgence at the heart of blogging? Reclaiming cultural discourse from the squares with word counts, editors, journalism degrees, advertisers, fact-checkers and critical templates? Not according to Bryan Markovitz, who would like us to “describe the methodology and formal techniques that [writers and choreographers] present within the historical context from which they draw inspiration.” Markovitz expressed this idea in response to Kirsten Collins’ post on NTO, critiquing her approach to writing about NTO (which surprised me because I’ve found her posts to be among the most consistently eloquent and insightful on the blog. Singling out her thoughtful piece on NTO over say, my own contribution–comprised largely of musings on such important topics as beards and making out–may have been a compliment of sorts) He acknowledges that what he’s truly critical of is the popular misconception that NTO is cutting-edge theater, adding intriguingly that “Pavol [ Poetics:a ballet brut’s director] is a very perverse fellow.”
It made me think back to the beginning of TBA and James Yarker of Stan’s Cafe saying in his lecture, Why be a professional artist? that his theater group was ignored early on because they didn’t have the right haircuts, the right trainers. Meaning British sneakers. That he learned that artists without a lot of depth can get far with the right look and a knack for hitting the zeitgeist. Nature Theater? has excellent trainers. And as I’ve noted earlier on the blog, powerful, zeitgeist-hitting hair. And yes, the theatrical techniques they employ are likely played out as impetuses for provoking sweeping paradigm shifts about the role of art and artists, at least for those familiar with the history of postmodern theatrical experimentation. And they seem to know that and not care. The fact that this territory is already mapped makes it easier to goof around in. But, I still think NTO is doing something valuable by making theater fun and insinuating the uniquely life-affirming qualities of live performance into the realm of viable entertainment. And their performance inspired me to become more interested in performances of all kinds, including more challenging work.
Markovitz sees it differently, commenting, “My concern … is how it stalls the real progress toward a new kind of performance experience that might truly change the way we understand live art. This kind of work, which demands highly specialized sites and modes of viewing, has not yet found a way to coexist with the survival interests of the contemporary arts performing circuit, which must sell a very limited kind of culture if it is to survive.” I’m not quite informed enough to venture a rebuttal to that.
Jessica Bromer 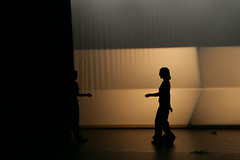