“What if every cell in our bodies (100 trillion) at once has the potential to invite being seen choosing to surrender the pattern of facing a single direction while perceiving all of the space in which I am performing (and time is my music…all of my movement is music).”
What could entrance a writer more than a dancer for whom writing forms the basis of every dance? Above is the basic “what if” on which “Room” is based. “Room” is the piece Deborah Hay choreographed for her most recent Solo Performance Commissioning Project, performed during PICA’s TBA Festival by PDX dancer/choreographers Linda Austin and Tahni Holt. (To back up a step, read these statements (down the page under Deborah Hay’s Concept) that each participant in the SPCP had to consider before applying.) Hay initiates a body performance with a query, a word/head launch point like the one above, starting with a “what if” that is usually, as she puts it, “preposterous.” She said yes it is “preposterous” that she would say “every cell” when there are 100 trillion, “but the fact that it is preposterous makes it a delight. I still ask because it’s interesting.”
And her asking is what makes her and the work she does so interesting. She asks questions that she knows cannot be answered. “My body is bored by answers,” she said. “I want to keep the dancer in a place of curiosity and engagement.” For example, “When I go into a studio, I notice I have a front. I point it toward some point in the room that I determine is the front. Why is that?” This makes work that is so different from so much more immediate than the, as Hay puts it, “look at me and do what I do” school of choreography. She credits John Cage for allowing her to ask questions larger than those coming from her own experience. I have a “lack of interest in self-expression.”
Hay has been focusing on solo dance. She believes that the art of solo dance is relationship which she describes with her Whole Egg Theory. The egg is cracked into a bowl. The performer is the yolk. The egg white is the space between the performer and the audience (the edge of the bowl). If you shake the bowl, the yolk moves around and energizes the egg white. She’s interested in that space between.
She shared that the highest compliment she’d ever received about a performance was when William Forsythe said to her, “You brought me to a level of attention in myself that I love, and kept me there.”
The Deborah Hay chat was a highlight of TBA because it did what a good chat should, provide the fantastic opportunity it provided to pull back the curtain and get a look at process through which and the armature on which these performances of “Room” were built. That Hay has traversed miles of conceptual territory beginning in her Judson days, is made evident through her work, yes, but what a treat to also be privy to the thinking and the work behind the dance that has developed through her years of experiment and deep attention. It’s this kind of chat (workshops too) from which PDX artists working in all disciplines can take something away to inform their practices. Thanks PICA.
–Lisa Radon 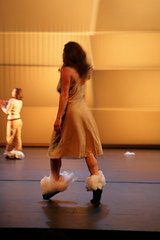