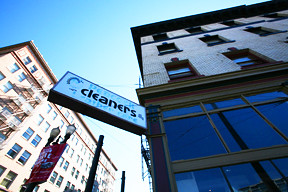 photo credit: Serena Davidson
The other day at Corberry Press, I picked up a pamphlet promoting and explaining Red76’s Travelers and Record Sound System: A Meditation & Sound Collection Center. By reading it, I discovered the following: To fully participate in this project, I should bring a CD of songs that I’ve internalized in some manner to the former site of Peacock Dry Cleaners. These songs will be played for other visitors as well as those within range of a small frequency transmitter. The project is democratic in nature and is intended to provoke conversations about democracy. It was inspired by Sam Gould’s experience of having the Leonard Cohen song Famous Blue Raincoat stuck in his head. Refreshments would be provided on-site. This all sounded good, but what to bring?
I had gone through a bit of a Leonard Cohen phase myself. On the eve of my 2001 move to Philadelphia, my friend John had presented me with a burned CD of songs he’d recently written, including a small gem consisting mainly of the repeated lyrics: When Jessie goes away/who is going to play/Leonard Cohen all day/…and like it? I could bring this.
Or, perhaps I could honor John’s artless style while providing something with a little more popular appeal, maybe Daniel Johnston or The Mountain Goats. And why not include something with personal significance from the other end of the musical spectrum, like Salt’N’Pepa’s Push It? The list grew and grew. Realizing that I would want to discuss whatever I eventually chose on the PICA blog, I narrowed my list down to two songs, each of which had resonated with me during a period in my life–middle school and high school–when my worldview was very much in flux.
1990–The cultural landscape was dominated by pegged pants, sculptural bangs, Milli Vanilli and Color Me Badd. I was in hell (7th grade in a conservative, fundamentalist Christian small town community in semi-rural Pennsylvania). One day my friend Mario invited a few of us down into the blacklit basement of his mother’s house on Main Street to share a discovery that would change the way I viewed the world above: The Dead Milkmen’s Metaphysical Graffiti. My favorite song on this album starts with the band members pretending to try to catch an airplane that’s flying by, being informed by a sound engineer that they’re being recorded, then deciding to keep the bit of audio in the song. It’s called Methodist Coloring Book and it goes like this:
You’ve got a Methodist Coloring Book/and you color really well/but don’t color outside the lines/or God will send you to hell/ cause God hates war/and God hates crime/but what he really hates is people/who color outside the lines.

I come from an agnostic, scientific family, but I grew up with a lot of kids who felt comfortable announcing that I would be spending eternity in a lake of fire for no greater crime than believing in the Paleolithic Era. To their credit, they frequently coupled this revelation with an attempt to steer me toward Jesus, usually through awkward, slightly unnerving youth group activities. The Dead Milkmen articulated my nascent awareness of the hypocrisy that fundamentalism of any kind breeds as they suggested a relatively peaceful way to combat the things we disagree with in this world: satire. I remember that immediately after listening to this album, we went back outside just as a parade was marching down Main Street. There were Shriners wearing fezzes riding around in miniature cars. The Shriners are an organization that helps disabled children, but we didn’t know that. Other than their predilection for clownish antics, they were indistinguishable from the Rotary Club, the Elks, the American Legion, The Mount Joy Town Council, in other words, the patriarchy. They symbolized the old-fashioned values that The Dead Milkmen were holding up for scrutiny through their lighthearted reference to the mortality of an American icon of neighborly, wholesome commerce. Inspired, we attacked the Shriners with the weapon that 12-year olds wield most ably; we made fun of their outfits.
1994–My friend Shaun and I logged a lot of miles that year driving around in his family’s pick-up truck listening to the Dead Kennedys’ first single California Über Alles. First released a year after we were born, California Über Alles, which simultaneously skewers the political far right and far left using an irreverent mixture of symbolism drawn from the Holocaust and Orwell’s dystopic masterpiece 1984, still felt fresh to a pair of 16-year olds whose views of the horizon were checkered with cornfields. In fact, the subject of the song, ultraliberal Jerry Brown’s presidential aspirations, was never out of date for long. The man just kept on running, most recently in ‘92. The Dead Kennedys employed the same verbal weaponry as the Dead Milkmen, but cut deeper. DK singer Jello Biafra once commented that the band’s name wasn’t intended to belittle America’s de facto royal family. Rather, it was a bittersweet commentary on the death of the American Dream. The fact that this subtlety was lost on both the majority of the band’s critics and the majority of their fans wasn’t that important to Jello. He put artistic expression first and didn’t care that much what people thought of him; in other words, he was a perfect role model for teenagers. And the song’s giddy, aggressive tempo fit perfectly into the emotional rollercoaster of adolescence. There was something deeply satisfying about speeding along back country roads chanting Mellow out or you will pay! along with Jello impersonating Jerry in the nightmares of conservatives. And deeply disturbing, too. Shaun and I had a ritual wherein he would drive extremely fast until I would ask him to slow down, not because driving 80 miles an hour on winding roads full of blind turns and small mammals was just plain stupid, but because I was “nervous.” He would comply and we would thus acknowledge that our temperamental differences didn’t preclude mutual respect. After we graduated, I fled to college and discovered feminism, among other things, while Shaun became more deeply entrenched in small town life. The next time we saw each other, I pointedly ignored his macho driving, instead taking issue with his confederate flag bumper sticker. By the end of the evening, we had both realized that the conflicted relationship we were bound to have as 18-year olds would pollute our memories of the symbiotic relationship we’d shared as 16-year olds, and made a tacit agreement to let the friendship slip away.
I have a picture of Shaun, taken on my 17th birthday, in which he is proudly tugging at the bottom corners of his t-shirt to create a legible, emphatic square which reads “Dead Kennedys: Too Drunk to Fuck.” This picture makes me more nostalgic than any other in my photo album, to feel the loss of adolescence most acutely and I’ve just now figured out why that is. It highlights the thin, vulnerable thread that connected me to another person at a time when new forms of connection felt revelatory. Shaun and I shared almost nothing except a political belief, a sort of anti-religion–not Satanism but, rather, a radical rejection of the notion that anything was sacred. According to our ad hoc religion, everything was fair game, open to interpretation, and ready to be used as raw material. And California Über Alles was its 23rd Psalm.
Thanks for helping me suss that out, Red76! I’ll stop by when Travelers and Record reopens (Wed-Sat 12-6 through October 7 at 403 SW 10th Ave) and write about that experience too.
Jessica Bromer 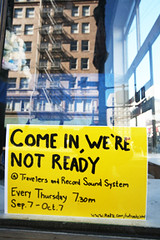