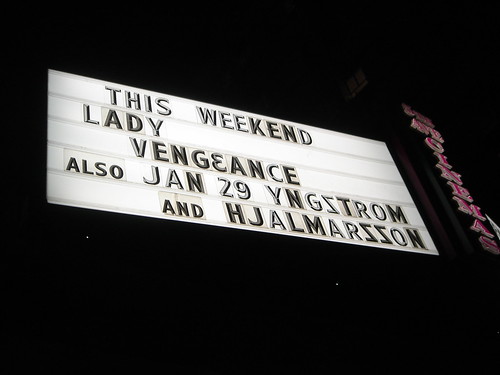 Insane names take over the marquee…
Frida Yngstrom’s “Piss Sculpture” was pretty amazing–a cast of the
bottom half of a woman wearing jeans, set high up on a pedestal,
perpetually darkening her jeans with the spreading stain that only
comes from a spilled drink or an incontinent bladder…
I appreciated Staffan Hjalmarsson’s project “Geggan,” for which he
produced 50,000 lbs of gelatin and transformed a traditional gallery
by giving the audience the power to do what they want in the
space–the “art” becomes whatever the audience does with the gelatin. 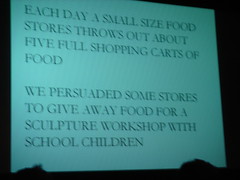 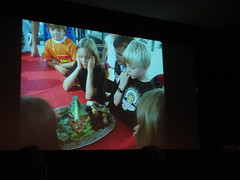 Another project by the duo encouraged children to make sculptures with food.
Yngstrom’s “Party Piece” illicited some gutteral sounds of approval
from the audience. “Party Piece” was essentially a performative room
drawing. Yngstrom covered the whole room in white paper and then drew
different scenes from parties on every surface-including people, who
were also wearing all white. The viewer could step into the drawing,
staging scenes drawn on the floors, tables, walls.
The work that dominated the talk, however, was the duo’s involvement
in the political fight to grant asylum to the (approximately) 30,000
refugees hidden throughout Sweden who are unable to gain residence
permits because of “insufficient” documentation. Obtaining
“sufficient” documentation would involve returning to the countries
from which the refugees have fled and asking for it from the
government. Not exactly the most palatable of options.
Yngstrom and Hjalmarsson’s involvement consisted mainly of
facilitating the production of visual protest material by teaching
protestors how to use the printmaking facilities at the University of
Goteberg, and doing much of the printing themselves.
But I found myself wondering where the line is between art practice
and political protest. Obviously it’s important to take part in one’s
social and political context, but when it comes to presenting one’s
involvement in political protest in the context of an art lecture, I
just want to know where the “art part” is. I thought the most
compelling work they did for the asylum protests was their
“performative sculpture”–the words “Don’t Be Afraid,” each letter
made of a frame with white fabric stretched over, lit from the inside,
each letter carried by a person.
I’m certainly not questioning Yngstrom and Hjalmarsson’s moral,
political, social center. They’ve obviously got their heads in the
right places.
I am saying that I think their beliefs resonate more clearly when
there is a personable visual aesthetic rather than a mass produced and
impersonal barrage of signage. 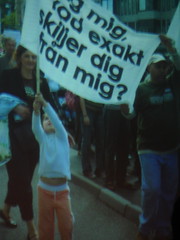