On The Road, on the street

I was in Half and Half yesterday afternoon eating a TLT&A when a crazy guy stepped into the store, shouting and gesticulating. His ranting was loud and suspiciously articulate. He had a Moleskine stuffed in the back of his waistband and a copy of On The Road in his hands. “Oh! Are you with the T:BA reading aloud thing?” I said. “Yes!” he said, and upped the performance. 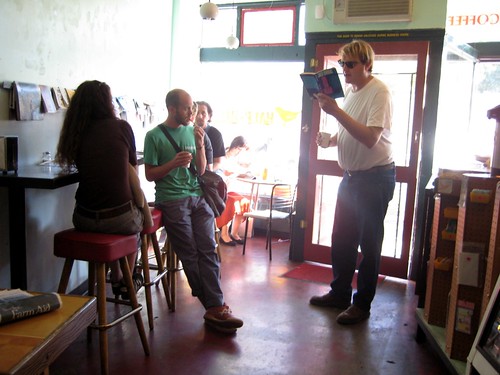 Barely skipping a beat, he coaxed a free espresso shot from the barista, and when the book mentioned whiskey, he pulled out a whiskey flask and drank along. “Maybe tomorrow I’ll get to a chapter that has weed in it,” he said.
He read to the end of the chapter while we watched and listened, chugged his shot of espresso, and was on his way.
Posted by Chelsey Johnson