On the first afternoon of the festival, I took a break from work to walk through the Pearl, in search of Cristian Silva’s “un-green” garden. The premise of Silva’s work was intriguing; by inverting such a quotidian thing as a garden so that its appearance clashes with our expectations, our relationship with that object comes into question. I was certain it would be impossible to miss a garden of blacks and reds and purples amidst the manicured berms and planters of the condos.
I spent far longer than I should have searching.
Ostensibly, the garden was within a one-block stretch between 10th and 11th, but after spending the better part of a half-hour retracing my steps back and forth in front of the same diners enjoying a sidewalk lunch, I had to move on for fear of being asked to. (It is worth mentioning here that after reading Frederick’s first-day summary, I’ve realized that Silva won’t be attending the festival and I probably won’t find the garden.) And yet, I was surprised by the number of false trails I followed, spurred on by the glimpse of an out-of-place color amidst the greens. Even knowing that the piece wasn’t completed, I still find myself scanning the flower boxes and gardens I pass, curious just exactly what a garden would look like without any green.
It was with this in mind that I walked into the atrium of the Wieden + Kennedy building to grab an extra catalog and stumbled upon Melia Donovan’s The Clandestine Periphery. 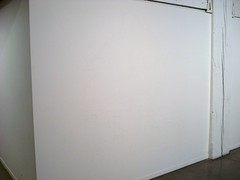 The first story of the elevator shaft is wrapped in a series of successive images, seconds apart, like film-stills. Each image is elusive, particularly in discerning their differences from one another. Movement between frames is slight and the image itself is so faintly delineated as to require squinting. But what you find if you pause and effort to complete the image is a voyeuristic scene. A small group of people gathers around a zoo enclosure, pointing and snapping images of a mountain goat traversing the boulders. The images seem more snap-shot than fine-art and their composition seems cursory. However, the images depict a scene of facile observation, in marked contrast to the conscious effort made by the viewer to discern the image. It makes a bit of a visual pun – a photographic-derived process that requires deliberate concentration to see reveals a group of people handily noticing (and photographing) a goat. 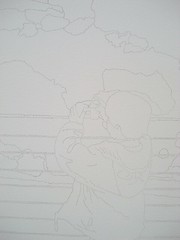 Like an autostereogram, it is hard to miss once you see it, but glance away and it takes a minute to reconnect the image. Donovan’s pieces end up demanding a more studied appreciation than they’ll likely draw in such a heavily trafficked foyer, but this is their appeal. I’ve been into the space three times since they were completed, but I only noticed her images on my last visit.
My next quixotic goal is to track down a performance of the Reading Out Loud project. I am curious how these classics that many of us read in our education will sound in another’s voice. It’s certainly no books-on-tape. Here the personal, slightly indulgent relationship that we have to reading becomes a public act, a forum for entertainment and bit of exhibitionism. Over the past three days, I have crossed the town between performances and exhibits and I still haven’t caught someone in the midst of their literary oratory. Needless to say, I’ve become a bit suspicious of people reading in public recently (of which there are a remarkable number), slowing my gait as I pass them on the street, turning my ear to catch any uttered lines.
These works that exist around the edges of the main stage performances urge us to reconsider the experiences we pass by in the corners of our sight.
Looking back on past festivals, these interventions (Dave Eckard’s Podium certainly comes to mind) have always been so cleverly placed amid the rush of events. In some ways, they are serendipitous to come across. I will always try to seek them out, but the unsuspecting pedestrian is perhaps even more likely to happen upon one. Some passersby will linger, others aware of the festival will actively engage, and certain people won’t pay a bit of notice to it – dismissing it as Portland eccentricity. But those who pause, listening and watching, will have to look more carefully at Portland for the rest of the festival.
posted by patrick l.