Total Eclipse of the Art

Outside, it was blindingly bright, and my companions and I had to cross a steaming chainlink-fenced parking lot toward a white brick warehouse to get to the exhibit, about which we knew nothing, just that Something was there. So when we stepped inside and turned a corner into a dark cavernous room, the contrast was so abrupt we instantly fell silent. An eclipse burned overhead through a hanging black cloth–an eerie fringe of light. And behind it, another, and another, all, it turns out, burning from a single beam mounted high behind us. The air was cool and had that sweet dustiness that says, A Smoke Machine Was Here, and that gave the beam substance and weight. 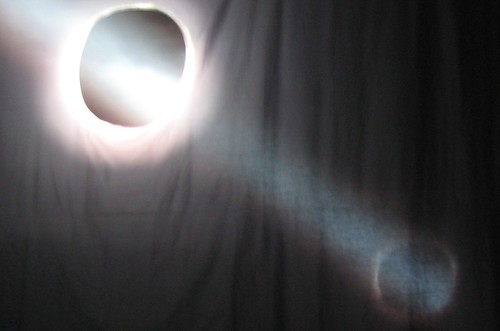 We whispered our way through the space, then snaked through a narrow pitch-black passage and emerged into a taller, darker room with a delicate, shape-shifting circle of green light on the floor. It was mesmerizing. And we couldn’t stop whispering.
<img src="http://farm2.static.flickr.com/1322/1352917694_dde799e328.jpg"
UPDATE: This exhibit, while right next to T:BA at Corberry Press, is not actually part of T:BA, but rather an Elizabeth Leach Gallery production. Hit it up when you’re at Corberry Press if you get a chance, though.
–Chelsey Johnson