An evening at the Bonsoir – Sara Greenberger Rafferty

Walking into the Corberry Press on Saturday, it felt more like I was entering the Someday Lounge than a local gallery. A stage awaits the performer, bathed in full spotlight. Behind it, a heavy velvet curtain commands the room until its moment to bow out when the show begins. But, incongruously, the curtain is behind the stage. Are we as viewers no longer in the audience, but instead about to see them from the performer’s point of view, as the curtain is drawn? 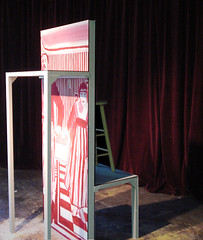 The performers have already taken their place; a slightly naive painting divides the stage in two. It is a vaudevillian image – a monochromatic flat of a man and a woman in their evening stage finery. Side by side, they appear ready to take their bow – are they thanking the audience for their gracious welcome or accepting the applause of the finale?
Above it all, a classic emcee’s voice introduces various women as the “Queen of Comedy” – each recording slightly overlapping the next. And in varying voices the performer always warmly responds, “Thank you so much. I’m just so delighted that you came to the Bonsoir tonight…” trailing off into applause and din of the room. The tinny, lo-fi sound of the recording imbues the gallery with the warmth of this fictional nightclub.
It is crucial to Greenberger’s piece to notice the comedy that underlies her work. Remember, this is an artist who has sculpted cream pies colliding with microphones, captured in mid-splat. Her soundtrack endlessly looping an introduction becomes laughably absurd, the perpetually empty stool appears ready for the stand-up comic to take her place beside it. It is equally important to recognize the element of pathos that so often goes hand-in-hand with comedy. Rather than simply bowing so low as to expose his neck in a symbolic gesture of performer’s humility, the gentleman in the painting has been decapitated by the stage itself. His stage tread the line between the cavalier self-deprecation of the comedian’s solo stool and taking the grand risk of the high-dive cabaret act on the upper scaffolding. He seems to have been a victim of his comedy, while the woman beside him gamely ducks it.
The green and blue striped bags perched precariously close to the ceiling felt less developed than the rest of the installation. From their high vantage point, perhaps they are the critical audience. Still, with their garish striped colors, they have an air of the big-top about them and are maybe just another part of the joke.
Greenberger Rafferty is the visual artist in a crowd of performers. She co-opts their tropes and traditions by endlessly repeating that public aspect that often differentiates the stage performer from the visual – the introduction, the current call, the applause. The curtain will never rise. The introduction will never cease. There is always a punch-line, there is always a joke. By refusing to tell the whole thing, Rafferty gets the laugh.
You can read a conversation between Greenberger Rafferty and Carol Bove (a scholar of early-60s Playboy) on comedy, “gentlemen’s magazines,” and spoken word LPs online in NDP#2 from North Drive Press.
See her exhibit along with Larry Bamburg and Space is a Place at the Corberry Press, daily through September 16th and Wednesday through Saturday until October 7th.
posted by patrick l.