Art for sale, but is anyone buying? – Andrew Dickson’s Sell Out

Dickson is back and well-rested (well-paid, he asserts) with a whole new persona. He has ditched the go-getter title “A.C.” for Andrew and traded his dated business attire in for the uniform of the new economy creative professional – the indie silkscreened t-shirt. Life seems comfortable as an ad-man and at first his piece appears like it will just be his strongest sales pitch yet. Cue slide-show. Cue corporate power-rock.
While other artists have played with the potentials of PowerPoint iconongraphy (David Byrne is perhaps the most noted example), they have largely re-aestheticized the format and forced it into service of more beautiful visuals. Dickson wholly embraces its limitations and style along with his faux-ignorant motivational demeanor. He walks the stage with the casual, “keepin’-it-real” sort of attitude common among professional development speakers. Perhaps because of the absurdity of his gearing a business seminar toward starving artists, he ends up revealing some of the mechanics of the format. Watching him, you realize just how indebted motivational speakers are to southern preachers. Dickson’s voice charts the cadences of a revivalist as he asks those in the audience to testify. But he is not simply the preacher, he’s the jail-cell evangelist – that “saved” convict who offers the wary a hope that they too can overcome their past.
At its outset, his piece called to mind a segment I recently heard on This American Life, in which a former aspiring musician laments the treatment he receives from his old art-school friends now that he has become one of the preeminent balloon animal artists in the world. Except that Dickson hasn’t faced that sort of ostracism. It is simply the best choice he ever made.
And for Dickson, “Sell Out” isn’t so much a label as an exhortation. 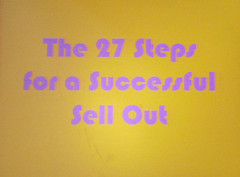 Thus begins chronology of the Sell Out. Through the “steps,” Dickson traces the unique temperament and life experience required to sell-out. Combine privilege, education, idealism, cynicism and a dead-end job and you have the most genuinely hilarious slides of his presentation. In essence, he offers a rubric for how to trade your artistic dreams in for a steady income. He has lists of acceptable college majors, suitable post-graduation cities, fashion advice, and recommendations for how parents can ensure the proper emotional baggage in their children.
I had expected to review Dickson’s piece as pure parody. In truth, it was surprisingly genuine and honest.
As so many maligned groups have done, Dickson attempts to reclaim a label from those who would use it with derision and don it as his mantle. But true to this course, the history of the term can be difficult to jettison. The pre-lecture slideshow offered internet definitions of selling out that ranged from the defensively positive (“Doing what you have to in order to continue doing what you love”) to the caustic (“When you no longer believe in what you do, but continue apace”). Dickson similarly oscillated between the two poles of public opinion. At moments he claimed that all sell-outs are happy with the choice they made. Yet other parts of his presentation gave a much grimmer picture – portraying the sell-out as the ugly necessity that is born of our contemporary culture and our relationship with art.
Dickson’s work is just a bit too sly to be taken as actual instructions for living, but all the while, just a little too accurate to be laughed at with a clear conscience.
It is naive to imagine that art exists apart from business and Dickson is quick to illustrate this by identifying the advertising revenue that drives the art world publications in which “authentic” artists gain credibility. Beyond the issue of corporate sponsorship, his work hinted at a saddening state of culture in our country. Dickson grinningly reminds the crowd that they don’t really want to keep struggling in this society where the promise of instant fame and digitally accessible everything has reduced the value of art. So often the people who bemoan not having the money for the price of a concert ticket or admission to a museum are the very same who freely spend their money on clothing. While opulent consumption has always been a signifier of wealth, it seems we have increasingly abandoned the idea that support of the arts can be indicative of status. In its place, we have favored tangible objects with which we can outwardly display our class.
At its heart, Sell Out struck me as a deeply cathartic performance, a way of wrestling with the choices he has made and, more broadly, how art functions as an economy. So dead on the mark was he in his 27 steps, charting the archetypal life-projectory of a middle-class creative that when he casually tossed out, “I read auras. Indie rock auras. Consult me sometime,” I was ready to buy it.
Andrew Dickson continues to preach the gospel of the Sell Out at Wieden + Kennedy on Thursday and Friday at 6:30.
posted by patrick l.