Mike Daisey: If You See Something Say Something 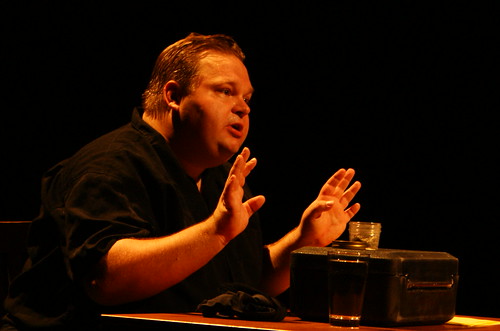 Much has been said about Daisey’s interwoven monologues and all of his tricks–good tricks, the practiced tricks of a practiced storyteller. He has trademark gestures–wiping the sweat from his face, a sort of huckster-carnival-lean-back-and-yell, excellent timing with his pauses, and of course, the epic-level cursing. But the main thing is that he seems to care, no matter how much he curses and yells about America, and that’s why it makes sense that people often compare him to Twain.
And this shit feels important, y’know? Like I need to get out and read everything Daisey reads, and know all that he knows, and see ALL that he sees.
I want to tell everyone about Trinitite, about how it feels to nearly start crying during a show full of laughs, how when I talk about the truth about “the bomb” I feel like now, now, I can articulate the shame that I feel, have felt, since my first college history class that taught me about hegemony and power*, that class where we read Lafeber and I fucking got a C. And I got a fucking C because I was so wrapped up in 20-year-old drama that I skipped the film sessions because I had more important shit to do.
I almost cried twice tonight. The first was when we talked–yes, we talked, because Daisey’s shows feel like dialogue, even if we, the audience, are non-verbal partners–of Nagasaki and Hiroshima, of the way that propaganda erases the victims. The second was when Daisey spoke to the significance of performing such a show on such a day**, when the weight of that day returned, and reminded me that those are scars that maybe we joke about, but scars that still exist. Daisey reminded me of those scars, and it was good, a reminder that meant something, that made me feel riled up and ready for action.
So thank you, Mike Daisey.
I’ll see you at the workshop on Saturday.
*Because maybe on the West Coast they tell you this when you are young, but not so in the rural midwest.
**This post was written immediately after the show on September 11th, 2008.
Mike Daisey‘s IF YOU SEE SOMETHING SAY SOMETHING continues at the PCPA Winningstad Theatre Friday, Saturday, and Sunday, at 6:30pm.