Mike Daisey / If You See Something Say Something

Mike Daisey / If You See Something Say Something
Posted by: Donald Allgeier 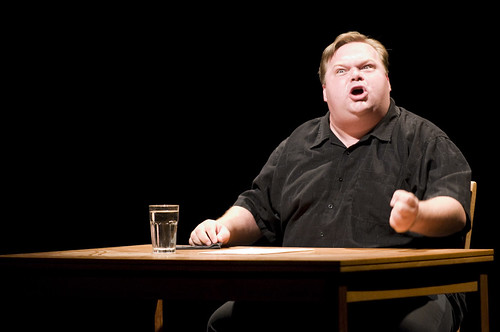 Mike Daisey is loud, abrasive, and hilarious. Like any great comic, he finds the humor in the horrific aspects of our lives. If You See Something Say Something is a monologue about fear, and it is about the institutions we have built up to combat that fear. He focuses most squarely on Eisenhower’s “military industrial complex” and the Department of Homeland Security. He traces the the industrial military complex back to the birth of the atomic bomb and Samuel Cohen, the other main character of his monologue. He examines the absurdity of this structure through the career of Cohen, the creation of a new mineral by nuclear testing, and a retail establishment selling used weapons laboratory detritus. Daisey also gives the brief history of The Homeland Security Department. He details the incredibly quick creation of a huge bureaucratic agency charged with vast amounts of power.

If Daisey is known for being loud, it is his quiet voice in between the gregarious moments that serve to accentuate his ravings. He portrays himself as an everyday slob in the monologues which serves the purpose of connecting himself to the audience. As he says in this piece, he hasn’t read the patriot act. Bits of his act sound familiar. Often there are sentiments and jokes that have been rolling around the culture in defiance of a new security order for the past seven years. His real achievement is bringing these ideas together with the histories of our security apparatus and creating a new frame of reference. He doesn’t do this to create an ideological statement or even to necessarily call the audience to action. Instead, he uses the new frame of reference to elicit our humanity. It is a gift to make people laugh for a couple of hours, but it is an art to revitalize them at the same time.