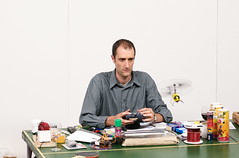 I think I TBA-O’d last Friday with Soujourn + Antony + Neal + Icerod + Flash Choir. Add this to a hectic work week and you have one weary little Sarah wandering into Imago Theater last night to see L’Effet de Serge by Philippe Quesne and Vivarium Studio. It felt so good to walk in off the hot street into a cool dark theater where my only role was to get in line and then find my seat. Don’t get me wrong, I enjoyed the bustle and urgency of Soujourn’s Built: feelings absolutely appropriate for both their theme and venue. I just needed some… space. 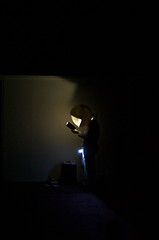 Quesne began with an astronaut. 2001 meets Jacques-Yves Cousteau actor Gaetan Vourc’h explored the dark space with a flashlight orienting his audience to the space, object by object. As a set-designer of ten years this moment of reflection must have been nice for Quesne.
Vourc’h said that they like to begin with the end of their last piece. It felt like when you set your TV recorder to a minute before your show so you don’t miss a bit. We were primed and the transition from astro-explorer to mild-mannered Serge felt natural. How lovely that he spends his evenings much like mine: glass of wine, dvd, convenience dinner, contemplation, robot friends. 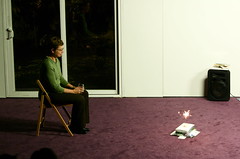 Serge has human friends, too. They stop by to view his short performances of special effects to famous music. I’m pretty sure I know the first woman (pictured left) from somewhere, probably my non-profit days. Patrick thought he recognized the long-haired, gift-bringing woman from a local coffee shop. I could imagine Quesne exploring Portland, meeting people and inviting them to participate in his performance much as Serge invites his audience to return for another very short Sunday performance. Their critiques felt appropriate to the characters, and I wonder if their script was based on what these real local folks first thought about what they saw. 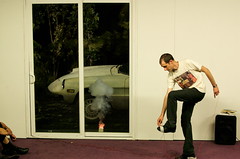 Serge’s tiny performances are delightful. Car head-lights pulse to Wagner, lasers dance to John Cage, glowing glasses nod and bob to a catchy Michael Jackson cover. I must admit that I felt a tinge of anxiety during his shoe-bomber-esque finale (pictured right): it was September 11th after all.
Patrick and I left the theater inspired and had Hotlips for dinner.
Posted by: Sarah Hoopes
Photos by: Patrick Sullivan