Such a pleasing mess. 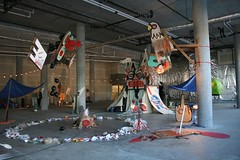 I’ll be the first to admit that I am not usually a fan of large-scale chaotic installations that streamline sculpture and painting into something unrecognizable. Yet the latest creation by the artist collective PAINTALLICA, on view at the Civic (1926 West Burnside), is a wonderful feat, to state the least. WAR PARTY is a messy, seamless cacophony of familiarity and the grotesque.

The setting is a cavernous empty room on the ground floor of the Civic. Construction on the locale is obviously in progress, with beams and wall insulation clearly visible. Amidst this gloomy cave, surprises arise. Like islands in the tropics emerging out of water, numerous stations of visceral creation exist in this world: from guillotines and signs of war to fantastic two headed beasts and looming aviators. An entire taxonomy of creation exists here, but it is one inhabited by war, blood, and destruction.
Accents of Dada mentalities echo throughout the entire room with nonsensical anti-war fervor created in chaotic rhythms. The strongest element of the entire show is an appropriated Pabst Blue Ribbon sign, enlarged and engraved with the word pain. That the sign is exposed to an open window with bustling Burnside streaming by seems no mistake.
It is shows like this where PICA is at its best in its visual arts programming. Where else would a group affirming anarchy and appropriation be able in inhabit an otherwise commercial space to promote anti-war messages. Yet PAINTALLICA is open only one more day. Run, don’t walk over to West Burnside tomorrow to experience this triumph.
Posted by Wayne Bund
Pictures by Wayne Bund 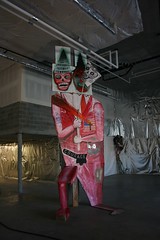 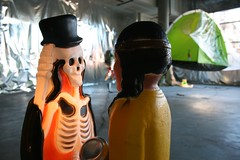 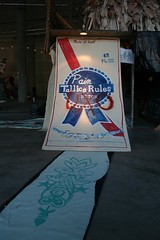