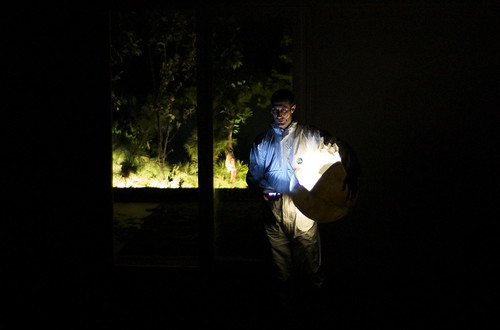 Photo: Patrick Sullivan
posted by patrick leonard
As the fog billows up just outside a set of sliding glass doors, the audience witnesses a purely-Kubrick moment. A cosmonaut, in illuminated helmet, carefully explores a suburban patio to the swelling strings of a symphony. But for as forcefully as that image appears, all of the illusion is harshly stripped away as the performer begins to speak. The cosmonaut is not some surrealist science-fiction character, he is our proxy on stage, exploring the environs of the stage to help ground the scene. As jarring as this would seem, L’Effet de Serge presents this action as though it were the most natural beginning to a performance. For this is a show about performance; about its creation, its delivery, and its reception.

Our cosmonaut, who will become Serge, acts as the narrator. Pacing through Serge’s unfinished rec room, he delivers an explicit exegesis of the set and the work about to be presented. His explanation feels very much like an actor who, prior to each act, reads the scene headings and set descriptions of a script. Before the characters have even taken the stage or the action has begun, this monologue is an explanation of fundamental stagecraft. In a sense, it also serves as a primer to Vivarium Studio’s approach to theater.
After watching Echantillons earlier in the afternoon, the cosmonaut’s demonstration felt very familiar. Speaking to the audience, he presents a basic vocabulary of movements, a few of the many actions that constitute Serge’s life. Thinking. Looking. Waiting. Mundane activities that fill our time and aggregate to form the rhythms of our daily existence. It is a sadly simple reduction of all of the parts of a man’s life, but that is what theater does: it selects the movements and phrases that represent our experience, piecing them together into a narrative. Actions signify personality. This introduction recalls the beginning of Peter and the Wolf, wherein the characters and their themes are presented so that the audience may anticipate and understand their roles. However, even as the cosmonaut serves as the audience’s guide to the show, he is still a construct of the performance. As he begins to explain the practice of dubbing a voice-over, his lips stop moving, while his speech continues, thereby throwing his dramatic presence into sharp relief.
When Serge appears, all of our recent awareness of the set and staging melt away and we accept the reality of his experience. Sitting at his cluttered ping-pong table, sipping wine and tinkering with a pile of gadgets, Serge provides a highly personal look at the origins of the creative process. He tests machines and listens to music, quietly and subtly practicing for his next performance. Part actor and part composer, even Serge’s own, private movements are accompanied by the background score of music that he selects to match his actions.
The scale of the “Effects” that he puts on for his friends means that their minor artifice is always visible – cables, plugs, boxes. A small firework burst or a synchronized headlight ballet are exactly that. This all occurs in marked contrast to the stage of L’Effet de Serge, where a system of hidden illusions project the “reality” of a home, complete with driveway and other rooms. Everything in the play signifies something else, while in Serge’s “effects” they just embody themselves.
Yet this does not discourage Serge’s audience from analyzing and contextualizing the shows. L’Effet de Serge perfectly captures the moments immediately after a performance when an audience earnestly scrambles to draw meaning and summarize it in a profound way. In the afternoon performance of Echantillons, the audience was literally given the power to change the performance with their action, but they still needed to discuss and push the meaning beyond the click of the mouse. They quickly assumed control over the show and started to “perform” for the actors, moving close to the windows, then turning their backs; rapidly assigning new action prompts, or witholding them altogether. The audience always wants to change the terms of performance, to contruct meaning and become an active participant.
Similarly, after each of Serge’s shows, his audience grasped at their memories in order to personalize the effects and imbue them with great significance. And in contrast, there quietly stands the sweetly patient Serge, who nods along to his friends’ interpretations, all the while thinking about the technical intricacies of his act. Serge takes a simple and playful wonder in his effects, just as his friends search for narrative.