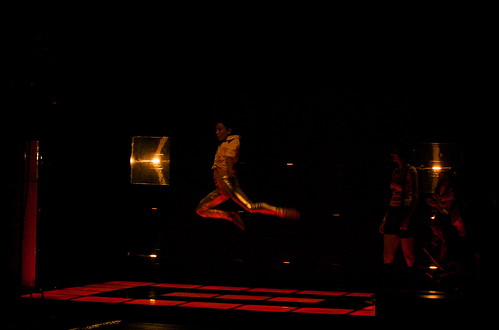 Dance-offs, Deconstruction, and Reiteration: Oh My!
By Wayne Bund
I don’t know where to start.
Feisty dance offs. Gorgeous actors on stage repeatedly undressing and exposing themselves. A lip-synched lecture of Jacque Derrida given from an exercise machine. A reenacted movie scene, which is an adaptation from a book, which is itself a modern revision of a previous book.

Somehow among all this, Superamas‘ BIG 3rd Episode succeeds with joy and delight. Yet nothing is as what it seems. What at first appears to be a dance show is something else. BIG 3rd Episode is part exercise in French deconstruction theory, part DJ sampling mix, part So You Think You Can Dance, and somehow, the show is greater than the sum of its parts.
Where to begin? Many things happen on stage, but essentially the show (can it be called a play?) is divided into two parts: an opening scene of a group of men rehearsing for their band, and a final scene of a group of women undressing and redressing in a locker room. In between are songs, creepy orgiastic videos that seem out of Eyes Wide Shut and fantastic moments on a dazzling, discothèque dance floor. Very few words, if any, are spoken onstage and most of the dialogue is dubbed from above. A scene is acted on stage, then repeated, stopped, reiterated, and broken apart until the original is a decimated clump of illusion and subtext.
At its best, BIG 3rd Episode fulfills its Brechtian roots, interrupting the show to remind the audience that they are as explicit in the experience as the actors. Such techniques work in connecting into an experience of exposing the lack of center to happiness, and perhaps experience itself. What’s left is an understanding of an indescribable thing, and it makes the show better for it. How fitting that Superamas was able to perform on a stage that was only days previously inhabited by Jerome Bel and his own French contemporary wonder.
Along the way, everything is sexy. During the latter half of the show, three specific women oscillate between being absolutely naked and barely clothed. Sex, if not beauty and truth in the Keatian fashion, are the subjects of this constant deconstruction of experience. 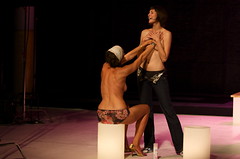 Yet not all was fun and sexy dancing. At one point later in the show, everything is stopped and it becomes clear that we are watching a scene from THE HOURS. Whereas everything was bright and beautiful, a soft underbelly of the show is exposed. What arises is a surprising homoerotic subtext to the beauty and spectacle on stage. And even deeper in tune with the show, the scene is a sampling of the movie THE HOURS, which is itself an adaptation from the Michael Cunningham’s novel THE HOURS, which is a revision of Virginia Woolf’s classic MRS. DALLOWAY. The frame which we are watching goes deeper and deeper into nonsense. Derrida would never be so proud.
To call BIG 3rd Episode a success is an understatement. Truth be told, I am not sure what else to call it.
Photos by Patrick Sullivan, All Rights Reserved