a toast to the founding father of the society of poofters

It’s a good thing I didn’t attend the going-away party for Mark Russell, because, from what I hear about the emotion (probably partially due to the inconceivable lack of sleep from PICA’s tireless staff), I would have been uncontrollably sobbing. How could one not be, when that’s when the last ten days asked of us? To feel the raw power that exists in the forcefield of TBA. I think by the last day, I could feel the visceral of the festival and absorb it by osmosis. Being among the messy monuments of inverted propaganda at Paintallica yesterday made immediate sense, like I just returned home to the country where I could read the language of the signs again.
Everything this year was bipolar. Forms were revered aesthetically while categories where destroyed irrevocably. Sculpture performed in monochrome just like the dancers in the Halprin fountains. Theatre got boiled down to monologue while narrative was erased by seemingly senseless words. Digital became physical, control became chaos, the mundane became monumental, posterity was disposable, audiences were the stars, devilation got appropriated, Portland was Tilburg.
In his first two years as guest artistic director, Mark Russell asked us to sit back and do the opposite of relax. We were poked and prodded by the reality that was getting under our skin but wasn’t usually under our noses. He asked us to think, to get loud, to get ready, to get set. And this year he let us go. He asked us to get down and dirty in the earth, to feel it in between our fingers, to hug our partner, to hug a stranger, to stop thinking and start seeing, to stop ignoring and start reacting, to stop watching and start doing, to realize that we’re dying when we could be truly living.
Every piece came with a warning about not paying attention to the man behind the curtain and being duped by the spectacle of the smoke and mirrors. “If you’re really and truly curious enough to be demystifyed,” they said, “you may actually see the real magic.”
And poof, he was gone.
- laura becker 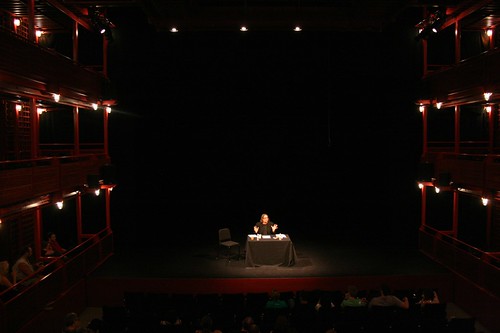