A brief thought on Superamas 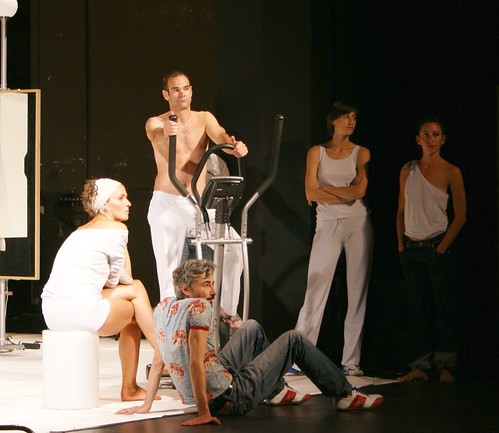 Photo: CaroleZoom (All Rights Reserved, PICA)
posted by patrick leonard
A few days have passed after seeing Superamas perform their BIG 3rd Episode (happy/end) and it is proving to be one of the shows that resonates the longest. It was raucous and sexy and I left feeling entertained, but when I asked my wife what she thought of the performance, she responded, “It was great, but something about it didn’t feel entertaining.” Leave it to the former Sociology major to better understand the Derrida references.
In my defense, my response wasn’t entirely shallow – it was, in fact, a choreographed part of the performance. In the program, Superamas relationship with entertainment was explained:
They dig out the power of the pursuit of happiness and at the same time its total vanity and predictability as well.

And the longer I reflect on the piece, the more I realize that we in the audience affirmed everything Superamas set out to prove. While the crowd shuffled about the auditorium, finding their seats for the show, one of the cast took the stage to sing a repetitive chorus of “Nobody knows how much it hurts.” The show had yet to “begin” and the audience was already joining in with a hand-clapping accompaniment. People cheered for a lip-synced cover of a Nirvana song as though they’d just seen a live band. We kept ogling the lithe bodies of the cast even after watching a Peter O’Toole/Peter Sellers film clip that jeered at leery strip-club patrons. Superamas performed a piece that was so overtly appealing and fun that the audience’s enthusiastic reaction was completely inevitable and totally calculated. It lampooned the spectator for being so primitive as to follow the promise of entertainment like a moth to a flame.
This was not the type of deconstructionist theater that aimed to thwart our enjoyment – if anything, it asked us to revel in it. Superamas has asserted that, “an eminently political position is incumbent on artists today: to not leave the monopoly of amusement up to Walt Disney.” “In other words,” as they explain, “‘acting like a whore’ can be an extremely subversive position.” BIG 3rd Episode was a tarted-up spectacle that tempted us to keep watching even as the show fell apart. Each time the performers repeated a scene, they retained all of their vibrant sex appeal and enthusiasm, while the fragmentation revealed how desire, sex, and death mirror one another. Our pursuit of satisfaction, of le petit mort, was shown for the unraveling, self-consuming fixation that it is. We so desperately want for our desires to be fulfilled that we grasp at cliched emotions and stock footage; BIG 3rd Episode is that certain chord progression that makes us tear up at the end of an otherwise bad movie, only to later realize how gullible we were.
Superamas wore their influences on their sleeves (even when not clothed), so it felt familiar to watch as the cast stopped their activities and turned a dispassionate gaze at the audience. Only days prior, in this same theater, Jerome Bel had explained this to be his favorite “move.” At the end of a performance that felt like an escapist pop-culture fantasy, it suddenly became clear that the cast had been watching our reaction for the entire show.