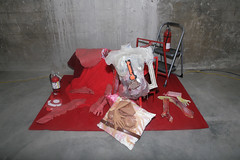 Lizzie Fitch/ Big Skin
9.04.08 at The Works
The 2008 Time Based Art Festival opening night, PICA.
Photo: Christine Taylor, All Rights Reserved, PICA
Posted by: Jenevive Tatiana
PICA Artist-in-Residence Lizzie Fitch joined curator Kristan Kennedy to discuss her installation in the basement space of Leftbank last week. Together they described the process by which the installation came about: Fitch brought a truckload of raw materials and semi-completed sculptures with her on a cross-country road trip, and the rest of the components trickled in through the course of the residency. The sprawling installation took shape in public view, with various people coming in and out to set up the performance space or install other art projects. Fitch noted that this was similar to her usual working environment in a large shared studio space in Philadelphia. As we stand amidst these constructions, the conversation quickly turns to her materials. Fitch’s sculptures are marked by a kind of indirectness, physical as well as conceptual: many of the components are store bought (often recognizably from Target or Ikea, with tags left dangling off), and the rest are created through a process akin to replication (her “skins” are directly molded from collaborator’s bodies). The installation commands the space, leading viewers through the maze as shoppers through aisles or visitors through a house with invisible walls.

As the artist remarks, you are never not in the space, you are always being corralled and following a curated itinerary. The vignettes are often monochromatic, or vaguely thematic: all manner of white objects here, sea shells and sand there. Some assemblages become firm characters–the artist points out a diminutive solider boy–and some clearly resemble logical places in the real world such as a bedroom or study. But it is impossible to assign a strict interpretation to any single sculpture or map out an exhaustive definition of their configuration. When asked what she had in mind for the “idea as a whole,” Fitch dodges specifics, instead pointing to the relational qualities of each part to whole and the events that happen within and between them. Similarly the artist describes her approach as pointing her fingers to things pertaining to a common experience we all have in the world, but cannot or do not communicate.
We spend some time discussing her unusual process: the salient role shopping plays in the creation of her work, and the ways in which she negotiates the collaborative process. What differentiates Fitch’s work drastically from earlier instances of assemblage, from cubism to someone like Bruce Conner, is that her “found objects” are conspicuously purchased new, rather than collected from junk shops or quotidian waste. She uses them for both formal and psychological qualities, but whereas other types of objects might carry a nostalgic charge of the passage of time or of previous uses, Fitch’s objects carry a (perpetually) future-oriented charge. They access a virtual realm where, reinforced by insidious lifestyle marketing, we continuously project ourselves as consumers: if I buy this item I will be happier, cooler, I will be a part of something, I will incorporate it into my identity. Of course this point is nothing new or shocking, but is interesting in that even though we may be cynical consumers, we nevertheless keep buying/in. Perhaps we are even witnessing the rise of new subject positions within this system, and expansions of the notion of “hacking” or “remixing” the raw materials of popular culture as one technique of negotiating its’ omnipresence. Fitch gestures towards this “remix mentality” that is second nature to our generation, and applies models more often associated with filmmaking and bands to fine art production. However, if shopping is our communal practice of identity-making, Fitch takes this to an uncanny extreme. The assemblages are gooey, bubbling, growing and decomposing in a seemingly irrational manner. The human-esque skins are like so many failed identity experiments shed, snake-like, and cast aside and left to their own devices. While beautiful, fragile and precious as objects, they are replications, their origin was always somehow digital. But the questions they provoke are nonetheless compelling: what creates a personality? The configurations evoke incredibly vivid impressions and each object engages the viewer viscerally, appealing to the lo-fi sensation of touch. Fitch’s vision is neither clearly utopian nor dystopian, pro- nor anti-consumerist. Instead, the artist alchemically channels an incredibly nuanced shared experience and makes it strange again. Fitch notes that there is no outside to this process of body- or identity-making. Instead she works in the in-between, sculpting relationships and impressions.