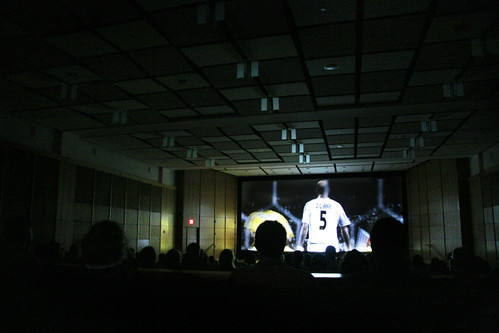 Photo: Don Frank, All Rights Reserved, PICA
posted by patrick leonard
Zidane: A 21st Century Portrait creates an experience difficult to describe; perhaps because it is so ambient and so abstract, it is all about impression. When I think about the film, my impressions are fragmented. Colors and textures wash over the viewer. Sounds blend into noise and then cut out altogether. Memory is interspersed with immediacy. All that remains distinguished is Zidane’s profile, superimposed against a field of stimuli. To watch the film is to experience total immersion in Zidane as the subject – his emotion and stature fills in for all narrative and content.

Focus is perhaps the filmaker’s best-employed tool in Zidane. Early in the film, Zidane explains that in the arena, sounds will blend into a single sonic force, out of which emerge oddly distinct noises. Ticking watches, whispers, fidgeting spectators – Zidane hears them all. The striking fact is that the players have absolutely no filter over what sounds they process. With a tight angle, always cropped close to Zidane’s figure, most of the film occurs with a short depth-of-field, punctuated by moments of clarity that bring the crowd into relief. We watch as blurred masses swirl behind Zidane’s tense frame, only to suddenly see an old woman standing on her seat yelling at the field or a fan lifting his team scarf above his head. It is a ploy that perfectly mirror’s Zidane’s own description of his experience on the pitch. Overwhelming chaos and intricate detail all at once.
The sequences with the sharpest overall focus are all mediated by an additional screen – the monitor of an on-field camera or the glass of a home television set. In these instances, we are ricocheted from the immediacy of being right upon Zidane, to watching him from afar with a (momentarily) greater understanding of the broader game at play. These moments most clearly mimic the sharp clarity of standard sports coverage, which reduces the game to linear, obvious binaries (hence the contrasting colors of the opposing teams’ kits). In contrast, our own efforts to follow the current game are consistently obfuscated by our perspective. We focus closely on Zidane, whose own gaze is unerringly focused off-screen on the play which we cannot see.
When Zidane does merge with the trajectory of the game, we catch glimpses of other players on the field, most notably his teammates Ronaldo and David Beckham. In 2005, Real Madrid had an all-star lineup, any of whom could have made compelling subjects for a film. To notice the “Sir Beckham” banner hanging from the stands raises the intriguing question: why did Gordon and Parreno select Zidane for their video portrait? In order to answer this, it is important to consider the conventions and connotations of portraiture. There is a degree to which a portrait serves simply as a documentary record, an attempt to capture a likeness for posterity, but to what extent do these figures need more remembrance? They have been taped in countless matches and publicized internationally in advertisements and sponsorships.
I’d contend that more importantly than documenting and glamorizing their subjects, portraits have the power to heroize them. Seen from this perspective, Zidane is a shrewder choice than the celebrity of Beckham or Ronaldo. As proof of this stature, look to the unfortunate, late red card in the 2006 World Cup, after which Zidane was still granted the Golden Ball award for Best Player and hailed as a national hero by the French President. While these events post-date Zidane, the filmmakers show a clear tendency towards valorizing their chosen player. Throughout the film, Zidane is glorified through his smallest actions (like the persistent scuffing of his cleats) and his appealingly humble comments. He explains the sense of fate that looms over each match and he tells of the only time in his life that he knew he would score upon gaining possession of the ball. All of Zidane’s shared memories and emotions have the feeling of hagiography, of mythic stories that will grow into our image of him as a player. Perhaps most tellingly, during the title sequence of the film, the letters of his name – Z-I-D-A-N-E – are overlapped to form a single, iconic glyph. This simple trick creates a sort of crest for Zidane and turns his identity into a symbol for something larger. Each of these details may seem quite minor, but the persist focus of the camera imbues even the most minute of Zidane’s actions with a great significance. As the film asserts, “magic is sometimes very close to nothing at all.”
In the end, it is a game. An unremarkable game in a season near the end of a career. The film repeats a mantra at three points during the match: “Who could have imagined that in the future, an ordinary day like this could have been remembered or forgotten as anything more or less significant?” Recording Zidane in the midst of play arguably makes this game more important than others, while also forever casting our memories of it in certain form. It becomes no more and no less than it actually was, even though it will always be remembered for this unique record. The match is a fragment, a memory, but one that stems from a player’s experience rather than the fan’s.