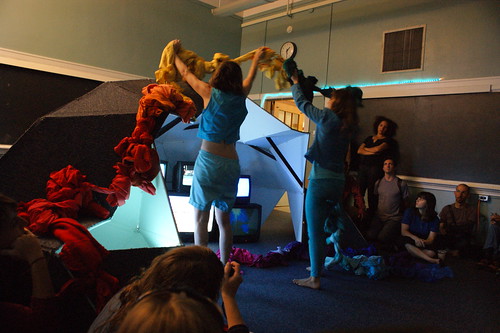 The movement language and collaborative dynamics that span the multiple iterations of the projects of robbinschilds are almost painterly in nature. The radical relationality of color is echoed in their volatile collaborative practices of video, performance and installation. The pigment of a painting–say a canvas by Dana Schutz or Amy Sillman–exists meaningfully through juxtapositions that cause the hue to recede, buzz, heat up, cool down or hum. The magenta in my hand will exist differently depending upon the exact the network of colors, intensities, scales and marks on the canvas. And of course the phenomenological and physical orientation of the viewer collaborates with this spectral symphony; from the more literal instances of color blindness and Synesthesia, to Proustian sense memories and unconscious associations, color is never static or obvious but always alive, contingent and opening out into possibility.

Some relevant cultural points of collective associations might include Derek Jarman’s peripatetic mediations on color, or perhaps the constructed/invented rainbow of gay liberation. The saturated sartorial palette of robbinschilds exists in this richness of affect and effect, the particulars shifting and reconfiguring as they emerge in each location and medium engaged by the artists for the festival. In fact, this point was made explicitly during the “Working Together” panel between the duo making up robbinschilds, Layla Childs and Sonya Robbins, videographer and photographer A.L. Steiner and set designer, builder and driver A.J. Blandford. The trope of monochromatic colors and the collaborative process that characterize C.L.U.E. are the materials of its very flexibility and continuing evolution between and among sites and mediums.
The very moniker of this constellation of projects gestures to its interdisciplinary and collaborative nature. The acronym C.L.U.E. recalls a long genealogy of feminist projects, from W.I.T.C.H. to L.T.T.R., which utilized shifting or mobile acronyms to encourage open-ended engagement or participation. Although the politics here are decidedly oblique and playful (“gentle” as robbinschilds remarked at the panel) the libratory–at times even defiant–undercurrent is distinct. For Steiner, collaboration is part and parcel of a refusal of patriarchal myths of the solo genius–and much more fun. Steiner cites collaboration as encompassing creativity, love, sex and anger, and indeed the panelists outlined the shifting plutonic and romantic bonds between the group and how these dynamics infuse the abstract narrative of the work with an impalpable poignancy. Describing the genesis of C.L.U.E., the panelists explain that the multiple incarnations of the project necessitated overlapping, hard-to-define roles amongst the collaborators, and a multiplication of ingredients, translations and approaches. Some things were planned ahead of time, such as the “movement language,” the structuring chromatic spectrum and the general itinerary, but the rest is a result of the ongoing dialogues between the artists, with the band Kinski and finally through the encounter with the natural environment and human structures. These reactions, experiments and spontaneous actions contribute to a “transcendence of intention” the panelists dubbed magical.
Threaded throughout C.L.U.E. are the questions “What does color mean?” and “What does location mean?” In the video work we see robbinschilds grappling with the resonance and possibility of each monochromatic ensemble, coming into meaning through their embodied particularities, their interpersonal dynamic and their confrontation with the landscape. These encounters are at times brutal, but just as often incredibly tender. The idiom of the road trip at the heart of C.L.U.E. resonates particularly well with the other On Site offerings. The panelists described an interest in the idea of a trip an escape and release, and as a genuine heightened state of being beyond linear time. Rather than unproblematically evoking this well-worn American myth, the artists stage its active construction and contestation, negotiating with uneven surfaces and charged vistas. The sublime and specific overlay, touch and glance. The pairing of this visual performance with Kinski’s stellar music avoids evoking the language of music video, and instead recalls the power of a walkman to radically and intimately color one’s experience of public space. It as if the dance is ritual to claim space in a way that makes no overtures towards ownership…to map place beyond the strictures of cartography.
While I am ostensibly speaking of the on-site installation, consisting of a deconstructed geodesic dome housing multiple televisions screening segments of C.L.U.E. or pure color, it seemed impossible–or just undesirable–to detach this iteration of the project from the live performances and discussions taking place around the piece. The installation creates a utopian structure from within the cracks and in-betweens of the existing location, carving out room for the endless chromatic and choreographic multiplicity embodied in the stacked screens. An alternate gesture towards multiplicity and non-linearity was offered in last night’s live performance at The Works with Kinski. As robbinschilds were doubled with their projected images on stage and screen, the audience was situated as the double of the landscape. I became very conscious of our role and responsibility in the ensuing collaboration: to provide an interesting context, to answer the question of “What kind of space do we create?” To be given the chance to enter into such a dynamic was a thrilling treat, and I hope we rose to the occasion.