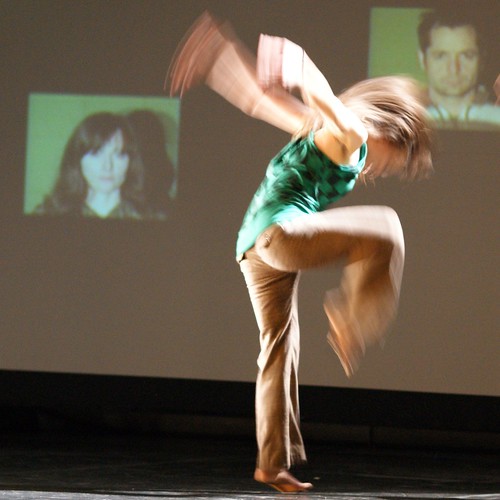 locust / crushed
Posted by Jim Withington
Just saw locust’s show and it left me that kind of joyous “HELL yeah!” feeling that I’ve been wanting during TBA this year. The festival has had heavy covered, maybe more than ever, this year (Meg Stuart; Young Jean Lee), and I’ve taken in confusion (Erased James Franco) and the downright eclectic (yesterday’s Melody Owens-curated short films). What I’ve been waiting for, in a venue other than late night WORKS shows, was the exhilaration of something like last year’s Superamas show, or the first year Nature Theater visited us. I’ve been looking for that unity of vision, fun, purpose, and ass-kicking energy.
Tonight, I got it.

Like Superamas, locust turned an eye towards club culture, though locust showed it less through lip-syncing deconstruction and more through frenetic fly-girl dancing and a hilariously spot on video of a crowd doing that “kinda dancing but mostly just bouncing my knees to the beat” thing (you know you do it, too, Portland). Much of the show felt like an exploration of white “see and be seen” dance culture, and locust made fun of it at times but just kicked ass at it at other times.
And then, the green. Oh the green. Green tinted lights, green outfits, green creepy video. It was an aesthetic choice that united the visuals of the show and helped the show feel tightly planned and controlled. Green aside, the video also played an excellent call-and-response role in one of the more extended sections, where the dancers were either synced up with or slightly behind the speed of the video. It also served to bring awareness to another of the show’s themes: commenting on live vs.recorded performance, to a fascinating degree. Well, well done.
The other main way that this tension played out was the score, which was one part awesome beatboxing (by co-director Zeke Keeble) and one part electronic/computer beats. After seeing an entire weekend’s worth of dance backed by bloopy/scratchy/this-is-how-contemporary-dance-sounds tracks, it was refreshing as hell to see someone working his ass off, beatboxing, playing loops, and sometimes drumming on his plywood cube seat like a high class street drummer.* This is time-based art, people–a score that relies on a performer to not screw it up, instead of a CD playing somewhere.
During the last third of this show, two performers got up to sing, in front of green balloons (of course), a sentimental ballad that made me scribble “vacuous lyrics” in my notepad. The pace of it gave locust a bit of slowing down before the brightly-lit stunner of an ending.
There will be haters, of course. There are always haters, especially when it comes to any beatboxing show in an artsy context (Reggie Watts excluded)(and my god would I love to see him collaborate with Keeble), or even just a show that might seem a bit less hard-to-unpack than other shows. But nothing as energetic, well-excecuted, and downright kick-ass as this show should be passed over because it’s not “edgy” enough.
This show was FUN. And I might even go see it again tomorrow.
locust’s crushed plays again on Tuesday, September 8th, at 6:30pm.

*Plus, the guy was out the door for a smoke almost as quickly as I left for a drink, which was rad in and of itself.