Sunday, September 6th
6:30 PDX Contemporary
Younger – Ethan Rose, Laura Gibson, Ryan Jeffery
10:30 PM The WORKS
C.L.U.E. Live – robbinschilds/Kinski
Some Rainy Day Magic – Mild Intro to an Explosion of Sound and Form
By Eve Connell
The coolest elements of Younger - the Rose, Gibson, Jeffery collaboration in sight and sound Sunday night in the PDX Contemporary window space – were not planned portions of the performance itself, but those more natural. Sun streaming through a light rain created a heavenly, golden effect that encapsulated the crowd gathered on the corner of NW Flanders and 9th. It was cozy. It was melancholy. It was the end of summer on that corner, and the music and film were just part of its subtle soundtrack. 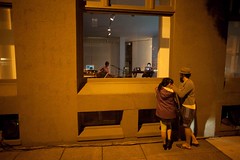 The performance itself was lackluster, compared to the weather, and anything else strolling around NW that night. The film, uninspired and washed out with images that were less than compelling. The musical sounds, calm and soothing. Both would have served better as background to a mellow museum gathering, or, perhaps, to a hot stone massage session. Sure, Gibson’s voice at the start of the piece (quite Feist-esque) added to the already natural glow of the evening, as did experiencing the piece en masse (at least to start) as true outside observers, but after only a few moments, we grew bored and hungry for different stimulus, and floated away for more earthly delights and (hopefully) a differently magical evening.
(An hour later, the crowd had dwindled, and the Aurora Trailer Leasing and Rental truck of extraordinary lengths pushed its way through the intersection. That was magic.)
Much, much later the magic did appear at the WORKS with the raw, energetic robbinschilds/Kinski performance of C.L.U.E. Live. Kinski set the tone with undulating beats that hummed through the packed auditorium space. We got into it, certainly as robbinschilds began their red, rhythmic march on the balcony towards the floor and stage. The film – the same red march through desert and foothills – served as backdrop for the performers (the band and the soon-to-be ecstatic dancers) – but did little else during the show, except distract. The film’s scene changes (from desert to foothills to lone highways to parking lots to the seashore to giant redwood stumps) and costume swaps (red to pink to blue to green to yellow to white and back again) and choreographed movements and gestures seemed without aim, neither enhancing nor highlighting the landscapes in which they appeared. There was no communion with nature. No response to varied environments. It all felt contrived to me. Their movements on film were awkward and downright dorky. The color costume changes were not at all connected with the natural and not-so-natural sets. What was compelling, however, was what happened in front of us, up close and personal.
Kinski’s accompaniment actually did more than set the tone – the talented rockers led us through movements and moods, crescendoing with a raucous performance that truly commanded the audience’s attention and harnessed the energy of the dancers. They music and movements seemed to feed off each other. Bass frenzy coupled with dance, nay, physical conflict and contrast on stage, was powerful. My heart beat more rapidly in concert and solidarity with the drummer and the dancers. When robbinschilds moved through the audience, we were able to feel even more connected, part of the performance, not merely experiencing it as voyeurs.
The costume changes throughout the piece still don’t jive for me. Yeah, it was neat to see bright Crayola colors splashed about the space – on the dancers’ bodies, on the floor in heaps, strewn on the ladder as a final rainbow statement of sorts. But it was the energy of the music, the complete letting go of the movements that sucked me in. That’s some kinda magic.
<img src="http://farm3.static.flickr.com/2452/3900036540_d484987d95_m.jpg" width="240" height="159"