Miguel Gutierrez and the Powerful People
Last Meadow
Monday, September 7th 8:30 P.M.
Winningstad Theatre
By Eve Connell
The most powerful people I’ve witnessed unleashing their vast and supreme talents in the last week have actually had nothing to do with T:BA:09.

Last Thursday night it all began with the Oregon Symphony’s performance at Waterfront Park. Somewhere between Lecuona’s Andalucia and Strauss’ Egyptian March, a glorious full moon rose on a perfect summer’s eve, over Mt. Hood, through an abstract line of clouds. This naturally beautiful display was clearly conjured up by conductor Carlos Kalmar and the powerful musicians sharing their symphonic excellence with the mortals.
Friday midday led me to Portland Art Museum for the Escher show – woodcuts from a private collection never-before-seen, meticulous engravings of marvelous designs that stump even the steadiest craftsperson’s hand, pencil drawings created for studies of his famous Heaven and Hell‘s powerful, charged patterns.
The weekend’s zenith arrived unmatched in musical ecstasy and excellence at the Aladdin Theater with an unparalleled performance by Dave Alvin and the Guilty Women. All seven members of this unbelievably talented troupe are at the top of their instrumental games. The raw energy exuded by drummer Lisa Pankratz surpassed anything I’ve seen in over three decades of concert going. Saturday night wasn’t just off-the-wall, it was off-the-charts and out of the stratosphere.
Lazy Sunday brought performances by others at the top of their games – the US Open players. If you missed Day 7 of the Sharapova or Nadal matches, you missed a veritable ballet on the court. (Ok, so the Open wasn’t held in Portland this year, but viewing was accessible, so I went for it. It counts.)
Monday afternoon led me to the long-awaited It Might Get Loud. And, it did. No one’s more amazing than Jimmy Page at age 65 waxing poetic on the electric guitar and his stellar career. The Edge strums his signature note and all the hairs on my arms come to attention. Jack White does his best to channel Son House, himself still visibly moved by the pivotal song that thrust him into music years ago.
Still buzzing from the energy transferred with the documentary, I skipped out of choir rehearsal early to catch Gutierrez and his Powerful People. Last Meadow was entertaining, the three performers’ energy channeled and driven, but I didn’t get caught up in it like I had during the previous, inspirational 4+ days of peak performances. The context didn’t make sense (I know, I know, that was the point). The language from James Dean movies was familiar and fun. The musical selections, enjoyable. The performers’ movements – even the lewd ones – structured and intentional and interesting. But I wasn’t swept away by anything they offered up. I was most interested in the out-of-character scenes and banter. The last dance piece moved us all along nicely like a good pop video. But, so what? 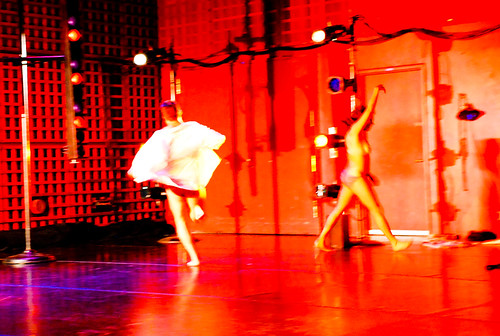 And, what’s with the underwear? Or nudity, for that matter, as a shocking, edgy statement? Yeah, yeah, yeah, we get it – stripping away all that we know, all that makes us comfortable. All convention, all constraint. But two T:BA:09 performances I’ve seen climax with the strip down just of the sake of doing so – gasp! – on stage, in public. Newsflash, team, it’s not edgy. Nudity is nothing shocking or new. It’s not making the statement you think it is. You want edgy? Then join the hundreds of pudgy, fish-belly white dudes putting their junk on less-than-cozy bike seats for a chilly spring midnight ride down Burnside. Edgy is the threat of skin meeting pavement.
The Powerful People weren’t, but I really didn’t care. Sure, I liked the piece enough but I’m still unclear as to exactly why. There wasn’t any emotional or visceral connection to any of what the performers truly worked at trying to communicate. You can smugly note that I just didn’t get it, which I’ll accept: I’d just really like to hear more musings from Jimmy Page ensconced in his chamber of LPs, or ride along with Amy Farris, transfixed and cranking away at her electrified violin. That’s power, people.