Back to Back Theatre in Pioneer Square
small metal objects*
posted by: Laura Becker
“Everything has a fucking value!” 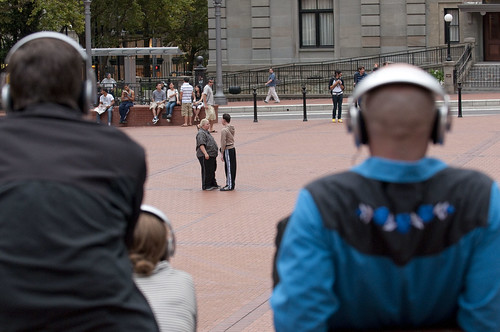 Steve is having a metaphysical breakdown and Gary, a successful businessman who prides himself on being a good friend first, and come to think of it probably Steve’s only friend in the world, is trying to soothe him from the extraordinary existential crisis that has arisen in Steve. Upon hearing that Gary needs knee surgery and will have to be put under anesthesia, Steve can’t help but imagine the worst. We are privy to this intensely private conversation between two friends yards and yards away from us in Pioneer Square because we have headphones, and they have subtle wireless headset mikes, and we have figured out who they are, standing over there, near the MAX stop, blending in like that really odd color in a paisley pattern, and, oh so, yeah, definitely, that’s them. Yep, here they come.

Having now identified the actors on the stage that’s the world’s a stage, we look around for a second, at each other, at the pedestrian traffic either booking it through the square to get to their destination, or instead kind of meandering, like a tourist might. Wait, why are those tourists looking at me? I’m just sitting here like anybody else would, if they were in a group of 150 folks with headphones mesmerized by an inconspicuous, possibly invisible moment between two stranger friends.
Gary is a friend indeed. When he gets a call from Allan (“Steve, do we know an Allan?” … 30 seconds pass … “Yeah” … seconds … passing …) he seems indifferent to doing lucrative business because he’s preoccupied with Steve’s paralyzing emotional state, which is accentuated for us with the minor key sparsely waltzy score. In what seems like slow motion that somehow isn’t slowed down from the actual speed, Gary, with a silently pleading look on his face, intently guards Steve as the CAUTION tape set up for the next day’s event in the square flutters in the breeze and in time with the music in our headphones. Gary clumsily and endearingly leaps into therapist mode to help Steve naively analyze this inconvenient bout of angst. It’s actually only inconvenient to Allan, who just needs to get “the gear” (you know what I mean) to help with his planned evening of entertainment for his out-of-towner clients in town, and eventually to his friend, (or at least a friend when he’s in need) Carolyn, who, having made a career convincing people to pay her for her “change management” skills, barely holds on to her cool more than 10 minutes before melting down after not getting her way with Steve. She and Allan really need the “I’m not moving from this spot” Steve to change his mind and move his body, or else Gary won’t accompany them to the lockers to close the deal. Gary’s not going to leave his friend, and that is that.
Allan and Carolyn spew out all of their slimy schmoozy skills to try to gain the upper hand with this simple pair of easy targets. Yet somehow they get foiled in the end. It was simply inconceivable to them that Gary and Steve could have no unscrupulous angle to exploit, no despicable motive to accomplish, no negotiating via bribery against their own and/or their friend’s sincere best interests. Allan and Carolyn walk away empty handed. All they accomplish is to help Steve feel much better, thank you, as now having conquered a situation by himself, by sticking to his instincts, he’s not quite so scared to face the world on his own, if worse comes to worse. Gary still has his morals and his beautiful sense of friendship intact. And those 150 folks with headphones, who were mesmerized by this fairly tale, are now walking out the way they came in, and wishing we lived in a world where it might actually come true.
*coins/working title