…And You Will Know Us By the Trail of Bread 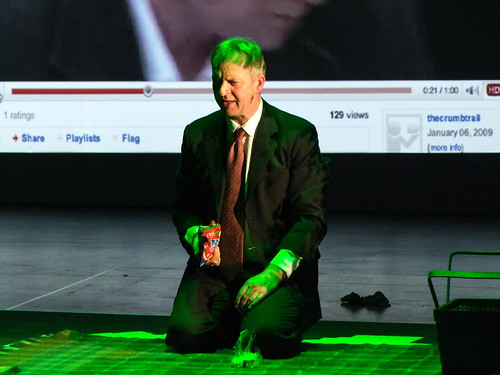 Pan Pan Theatre, The Crumb Trail
Posted by: Jim Withington
I began this post today simply because I felt the need for a different voice up here: simply put, Pan Pan Theatre’s The Crumb Trail is not a bad show, and I didn’t want it to go out like that. In fact, I’d go so far as to say that this is the best of the “weird” this year, of the stuff that made the “WTF?” bells go off in my head. And for many festival-goers, that’ll be enough of an endorsement for them to see the show.
It’s not a perfect show, and it wasn’t my favorite of the year, but it was definitely both good and worth attending, and I only wish I could have gotten this post out before the last performance started tonight.

On the other hand, it remains a show that could use some unpacking, and a show that asks more questions than it answers, questions including:
–How come they didn’t share the baked bread with the audience? It smelled fucking fantastic. Would have have been too Andy Kaufman of them (or maybe just too Alexandre Bettler?) to share?
–Why the hell did the audience laugh so much at a scene that transformed rape into stuffing a young woman’s face with bread? In the workshop led by their director, I realized that their process has some overlap with Chicago’s Neo-Futurists*; it seems they also share the “audience laughs at really inappropriate scenes because they are so used to laughing” trait as well. I would even argue that the scene was a bit irresponsible because of how it was perceived.
–Is Hansel and Gretel really just a crutch to hang their (baseball and fairy tale) hats on? Did they just want to wear lederhosen and flash their underwear? Could they just have made a show full of random scenes, that looks at the relationship between internet culture and live performance the way that many of the scenes in this show did?
I think that last bit was the best part of this show for me. Repeatedly (almost annoyingly) during this year’s festival, we saw scenes where dancers danced the same simultaneous movements on stage as in a projected video. Seeing Pan Pan cueing up their own videos, attributed to their own YouTube Channel, sometimes recreating them on stage while the video played, seemed like a direct commentary on this phenomenon. Even better, I found myself fighting to remember to watch the live performers because there was a YouTube video to marvel at and watch. What a great way to examine live performance in a digital video age.
The Crumb Trail cheekily played with and made fun of many theatrical conventions while creating their own little staged world. Pan Pan displayed their tech elements with an eye towards the future, while also mocking their relationship to live performance. In the process, they made an entertaining show that bounced from hilarity to Hamlet to the Star Wars kid to savagery. It seems to me that this kind of show should be welcome here at TBA–and for me, it remains a highlight of the festival.
****
*Pan Pan’s director mentioned that they created about 50 scenes and then seleted which to use for this run of the show, a process similar to, but not exactly, what the Neo-F’s do for Too Much Light (incidentally,a show PICA needs to bring out here for TBA sometime)
****
Alternate headlines: Don’t pan the Pan Pan: these crumbs are worth following; Hangin’ with Mr. Hansel; When Irish Eyes are Skypein’; A++ WOULD VIEW AGAIN 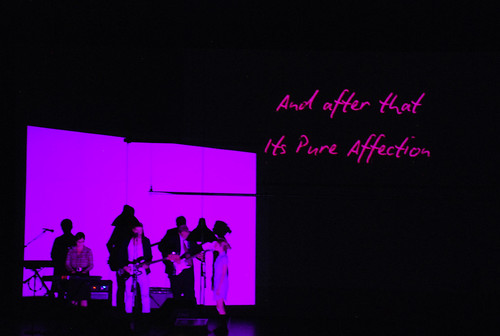