Back to Back Theatre
small metal objects
Friday, September 11th 12:30 P.M.
Pioneer Courthouse Square
By Eve Connell
My pals and I are obsessed with a game known to us as Portland Sightings wherein a keen-eyed viewer (one of us) stumbles upon a character or a scene as part of the backdrop of our every day lives and calls the others to report out in excruciating detail. Heightened levels of hilarity and/or disgust are always encouraged. Anything is up for grabs – obviously, the most strange and complex people garner the most enthusiasm and attention. Participating in the public, subtle spectacle that was small metal objects was a real treat, to say the least, and added to my fodder for this week’s Portland Sightings installments. (Noteworthy interruption: Mandi has just called to report on the 250+lb woman in yellow spandex bodysuit with green thong overlay playing tennis at the courts near her house. See my point?)

The audience perches on the steps of Pioneer Courthouse Square on a glorious, endless summer day, with headphones on, anxiously awaiting the Back to Back show to begin. But the show is already on: people on their lunch breaks cruise the information tables at a volunteer fair of nonprofit and other civic minded organizations; local favorite Sneakin’ Out bangs out another fun set of familiar covers with a twist; government protesters and conspiracy theory lovers hand out flyers that uncover the real truth behind 9/11; homeless wander; children scamper; hippie activists with clip boarded petitions abound. 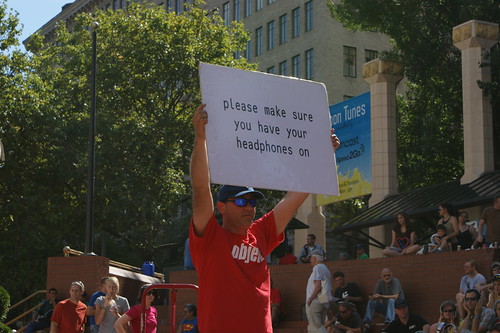 My gang makes hats out of newspaper pages to try to beat the sun’s harsh rays. A few lunchers try to sit in our ranks, but are quickly shooed off by T:BA:09 volunteer ushers. We wait. Before we know it, soft musical sounds begin to come through our headsets. We look around. A giant man sporting make-shift Lawrence of Arabia garb (in cow print motif) struts by. In our headphones, dialogue between two Aussies is now clearly heard with slow musical beats highlighting their heavy conversation. Cops stroll by. Sneakin Out takes a break. After only many, many moments, we finally see them emerge from the crowd: Gary and Steve with headsets, too, talking together, closely, intently. Barely anyone else seems to notice. 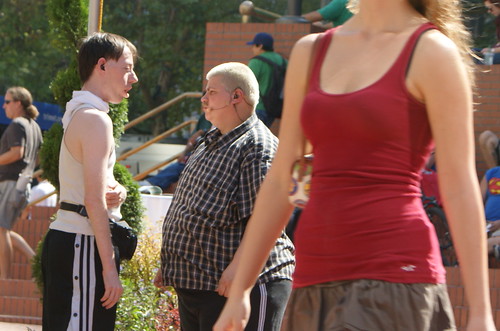 While the drama unfolds in front of us all, drama that spans two additional characters, a mysterious plot, mental/emotional anguish, and very little action, we become more than just outside observers. We are part of the drama, too. Passersby don’t notice the performers or the audience for what we are. The performers are part of the mix of people in the Square, and sometimes, in the way. It’s fascinating to watch how others avoid them, and us, too, though, some don’t. An ever-hopeful dude on his plight to legalize marijuana yells at the silent audience to sign his petition. Another wants endless hugs for everyone, and holds up his sign that notes his website address. Two women with burritos plop down on the stairs, then realize that something other than lunch is going on, and scurry away. People stare. People politely shift their gaze.
Challenging our assumptions about public/private space, and audience/participant roles is part of San Francisco’s REBAR (rebargroup.org) schtick, too. The group spent time in Portland last year, leading willing thrill seekers through a series of activities in downtown Portland’s public spaces, activities that blur the lines between acting, participating, observing, and challenge unsuspecting observers to interact with the antics (or not). It was fun. It was folly. It was Sociology 101. So was small metal objects with its supreme set for most excellent people watching, performance that relies on audience-as-spectacle-participants, and breeding grounds for commentary on our colorful, urban life. Makes you want to shake up the landscape more often. 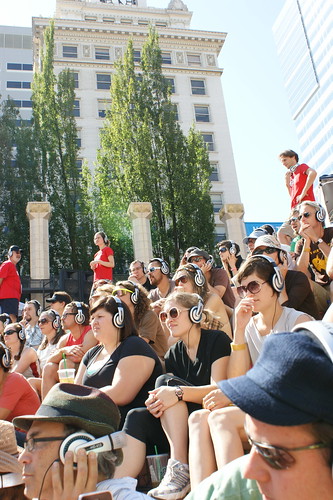