Some Things Last a Long Time

Pan Pan Theatre: Performance as an Autonomous Aesthetic Activity (workshop)
Inside/Outside: Back to Back Theatre (noontime chat)
Posted By: Julie Hammond
“The problem with theatre is it takes up so much time.” Gavin Quinn, Pan Pan Theatre 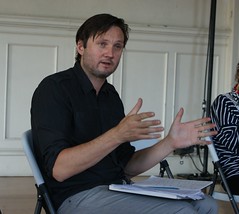 “Our work takes a really long time.” Alice Nash, Back to Back Theatre 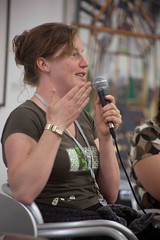 For 120 minutes Gavin Quinn Artistic Director of Pan Pan Theatre, giving his first workshop since 1999, spoke with a group of 20 self-proclaimed individual artists, about the trouble of theatre. This was less workshop than lecture, and he guaranteed some people would leave feeling annoyed by the lack of doing, but what is to be done? Theatre takes so long.

Pulling quotations from Wittgenstein and Brecht, skipping from empathy as a performative tool to fear of pretension/audience as a blockade in creation, Quinn distilled a semester’s worth of performance theory, theatre history, and philosophy before moving on to one exercise about presence. Presence on stage is, after all, the most important tool for an actor, and while Quinn assured the group that presence could be taught, there was of course, no time. Theatre, really just a another word for a type of art practice, is a strange beast synthesizing visual ideas, text, music, movement, story, and pulling them out over time. “Theatre only makes sense,” said Quinn, “if you make something concrete for the audience. Performance reconnects theatre to philosophy.”
The next day Alice Nash, Executive Producer of Back to Back Theatre, a 22-year old ensemble company based in Australia, talked us through the company’s process, personnel, and recent performances. The current group of seven actors work in collaboration with guest artists (performers, architects, composers) and make a new work about once every three years. This is a long time. Forty weeks a year of creation process, rehearsals nearly everyday, hundreds of hours of improvisations thrown away.
In both Quinn’s workshop and Nash’s chat with Erin Boberg, the parallel current to creation duration was the need to disrupt the thing you just made with the thing you are making now. For Back to Back this meant following small metal objects, “the good news of humanity show”, with Food Court, a performance where two people kill a third or “the bad news of humanity.” For Quinn and Pan Pan this means being prepared to move away from collaboration, to let people know when they are making bad work, to start making theatre and allow yourself end up creating a book of photography. The amount of time it takes to make is one thing, the openness to where that time takes you is something else. Somewhere between is the place where craft becomes art, inventiveness speaks to the past, and performer connects with audience. It makes perfect sense that these long processes result in short performances (Pan Pan’s Crumb Trail clocks in a 75 minutes; Back to Back’s small metal objects, 60). When the history of theatre and the process of making it is so long, why not give the audience something short and sweet?