Raimund Hoghe
Bolero Variations
Friday, September 11th 8:30 P.M.
Newmark Theatre
By Eve Connell
Subtle, meditative, captivating seemed to be the organizing principles of Raimund Hoghe’s US debut performance of Bolero Variations. So much happened with so few, precise movements of the five minimalist dancers. One of the dancers (originally set for six) had the misfortune of being French though Algerian born, and thusly had his passport held by US Homeland Security officials. (All perfectly orchestrated for a September 11th performance, in case we weren’t paying attention.) While this news came as a blow to us all, and certainly affected the mood and energy of the company and T:BA:09 staff, it did not appear to hinder the work in any obvious way – and may have actually added another layer of subtlety, a variation.

The score (with music beyond Ravel) drives the individual pieces and each dancer to command his/her own space. I was mesmerized by the simple gestures and slight actions of each during our evening together. Even the excessive repetition kept my attention, as I was soothed by the patterns unfolding in front of me. 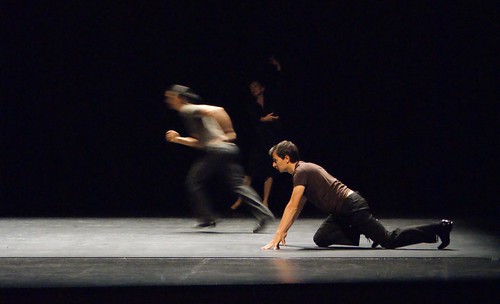 Hoghe’s vision is delicate and certainly causes us to wonder about how his physicality enhances his creations on stage. I suppose all expectations of what a dancer should look like, and what a dance performance should be are shattered with this debut. I’m curious, too, as to how audiences in other countries, with a more diverse demographic react to such a powerful piece. We will have to read the reviews.
<img src="http://farm4.static.flickr.com/3496/3908598853_fdc2821756.jpg" width="500" height="333"
While I appreciated the pace of the slower pieces, I also enjoyed those set to Spanish favorites like Besame Mucho, as well as the humorous interludes. The nearly final piece that focused on rice being poured from sacks into perfectly circular piles augmented by a concentration camp story (of hope?) was lost on me and took away from the overall peaceful mood that had been established. By the performance’s methodical, rhythmic ending in music and movement, all dissonance and distraction were forgotten, and I left the theatre calm and quite transfixed. 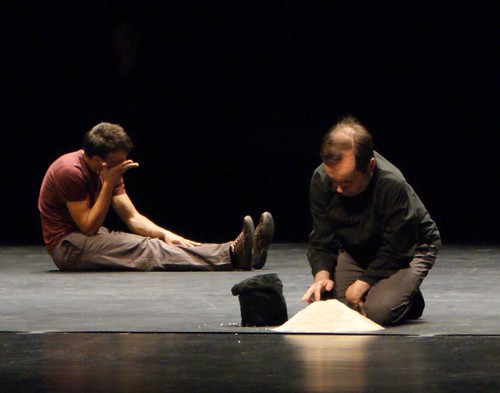