AMYO/tinyrage - too
Posted by: Meg Peterson 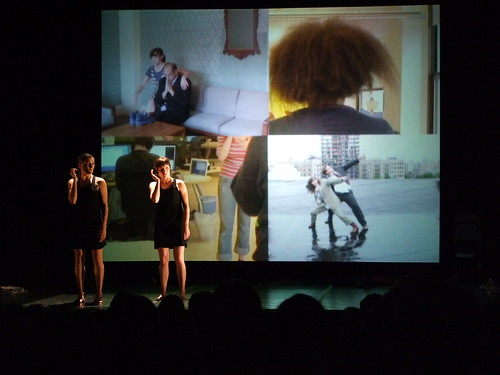 We all have a way about our walk; it could be a high center of gravity, a hoppy thing, a shuffling thing. Maybe an unavoidable gesture, or some habit with our hands. There’s a little bit of dance to the way each person moves through the world, even in the most mundane of tasks. Amy O’Neil and Ellie Sandstrom explore the different ways individuals connect through movement in AMYO/tinyrage’s too; a piece that combines a video projection of 50 separate duets with O’Neil and Sandstrom’s live performance. The video was filmed over the course of a year, hopscotching across the U.S. from Washington, Maine, Texas, Idaho, and New York, to finish with a final jump to Tokyo. In many ways the piece feels like a diary of movement, charting relationships via hip swaying and arm swinging. O’Neil and Sandstorm appear as one of two in each duo, though they seem unable to find one another on screen. They manage to remain connected through constant costume changes, intermittently wearing the same items of clothing; sharing them way you would with your sister, or your best friend: a favorite pair of cowboy boots, a polka-dot skirt, a pink t-shirt, a striped dress. The prettiest moments happen when the live dance almost mirrors or overlaps the dance happening on screen, while all four dancers share fragments of the same wardrobe as well. These elements push time around; suggesting a sort of continuity that seems to echo the idea that this is a dance that could be repeated with many different partners in slightly different ways, maybe it’s simply a way of communicating a story or a conversation.
Too shifts dramatically when we’re taken to Tokyo. O’Neil and Sandstrom bring us along on a fragmented montage of drinking and karaoke with friends, that pauses briefly during the live performance to haul an audience member on stage as candy and soda are passed around the house to share. Coaxed into singing along to a roller-coasting patchwork of songs, the volunteer is doomed from the start. Stumbling through a lyrical gauntlet with a bit of aid from the dancers, it’s a strange punctuation to the dialogue about human interaction. Too wraps up with a trip to a Japanese love hotel, O’Neil and her partner dressed as school girls and perched on a motorized circular bed, revolving before mirrors. The dancers fall into a series of slow synchronized poses, spending much of their time pointedly staring into the lens of the camera with their best bedroom eyes. It’s a curious close to a piece that found it’s strongest moments in phrasing between screen and stage, perhaps leaning a bit heavily on a journalistic aspect that simply document where the dancers were, and who they were interacting with. Nonetheless, too still leaves one with the desire to maybe grab the hand of the person waiting patiently next to you in the elevator, and spin them around — it feels like it might be a better way to say something, sometimes.