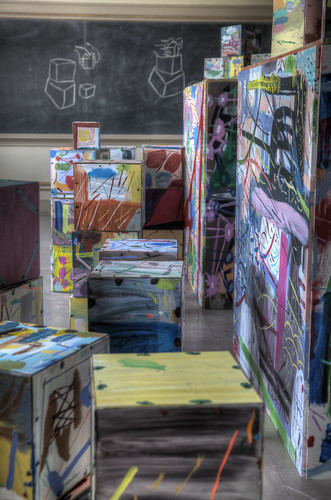 FOREVER NOW AND THEN AGAIN, Jesse Hayward
Posted By: Jenevive Tatiana
If you imagine that participation in Jesse Hayward’s FOREVER NOW AND THEN AGAIN is merely formal, the enterprise rings with nihilism. On the one hand, it would seem to suggest that the idiom of abstract art has been so exhausted that any potential for expression or innovation it moot. Each dexterously constructed–and aesthetically gratifying–hybrid component is void of differential value; every possible combination is as meaningful or meaningless as any other. Neither the hand of the artist, nor the manipulation of the audience, carries a potential for significance. In fact they undercut each other. The painterly prowess of the artist and the magnitude of his undertaking is diminished by the interchangeability given to his forms, and the volition of the collaborator is attenuated by the equivalency of any possible combination. Free-play is allowed, but only because it has always, already been drained of any consequence. Both the artist and the audience are positioned as deficient and ineffectual. On the other hand, it might be ventured that the artist’s signature is ineluctable; his hand so powerful that all possible permutations rendered by the viewer-collaborator are subsumed by his project. In this proposition, any collaboration by the audience is of nugatory import. The bounds of participation are overdetermined: all deviations or provocations introduced by the viewer-collaborator are incorporated into the overarching framework of the artist. They sit comfortably within the visual identity of the project, even constituting it as such; any variation is perforce recognizable as part of the artist’s language. While this rendition attributes significant intent and effectiveness to the author, the participation of the audience is ultimately inconsequential.

Yet, this set of interpretations is not wholly satisfying and is not able to account for what makes Hayward’s installation so compelling and fresh. The piece actually shifts the terms of the conversation away from threadbare formulations of authorship and collaboration that inform the aforementioned questions. Rather than merely formal, the participation proffered by FOREVER NOW AND THEN AGAIN is crucially integral to its reformulation of the boundaries between artistic disciplines and between objects, their makers and their audiences. A formal and literal space is created through the installation that is radically contingent, dependent on uncertain or conditional future engagements. The piece exists in a capricious temporality marked by indeterminate shifts and foreclosed resolutions. It is never complete, and yet this open-ended way of being does not imply that it lacks something. It gestures towards a future which is perpetually delayed and displaced into the present. This time-based stance puts forward the iconoclastic proposition that the very act of composition–or of any creative undertaking–reveals that any other configuration is just as possible. Form does not simply express a pre-existing essence, but co-creates it: a radical proposition if taken seriously. The logic which governs this process is not anarchic, but rife with possibility and responsibility. However, this potential exists mostly in an intangible, abstract realm, quite at odds with the hands-on involvement and immediate visual gratification delivered by the work. This is not to say it is any less effective or interesting for this contradiction. Rather, the very salience of this paradox in the work points to the high stakes and novelty of Hayward’s practice, which positions his work at the very limit of intelligibility. In fact, this mien of provisionality has been remarked to be at the very forefront of various contemporary (or otherwise relevant) painterly practices, which are characterized by tentative gestures and an aesthetics of incompleteness.