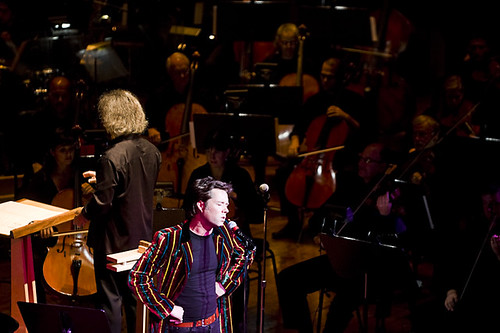 “I’d love to write a really crazy opera that is performed for another 500 years,” Rufus Wainwright told me in a 2003 interview. “And I’m just saying that a lot because it’ll force me to do it.”
Seven years later, I finally experienced a sample of this long-awaited labor of love when Wainwright performed excerpts from Prima Donna with the Oregon Symphony. In the spirit of Portland composer Thomas Lauderdale, who was instrumental in plotting the collaboration, Wainwright excels at using his status as a mainstream musician to bridge modern and vintage works. In 2007 I attended his Hollywood Bowl tribute to Judy Garland’s iconic 1961 concert at Carnegie Hall, and in 2001 he released “Grey Gardens,” a haunting song inspired by the 1975 documentary about Jackie O’s wacky cousin and aunt.
So who better than to introduce a new generation to the intimidating world of opera? Prima Donna takes place on Bastille Day 1970 — the same day Lauderdale was born, coincidentally — as an aging diva considers whether to retire. Scottish soprano Janis Kelly blew the roof off Arlene Schnitzer Concert Hall with the opera’s climactic finale, after which Wainwright joined the symphony to perform selections from Garland, his aunt Anna McGarrigle (“Kitty Come Home,” dedicated to his late mother, Kate McGarrigle), fellow Canadian musician Leonard Cohen (“Hallelujah,” with Kelly and local rocker Storm Large), French Romantic composer Hector Berlioz and his own pop catalog. Unfortunately, the latter repertoire was woefully underrepresented; his songs “Beautiful Child” and “Between My Legs” seem especially suited for stirring orchestral arrangements. But that’s a minor quibble in an otherwise magical evening that only could’ve happened in Portland.