From symphony to skate punk, T:BA:10 makes a grand entrance

Oregon Symphony + Rufus + Japanther + Shadow Puppets = My Kinda Night
Opening Night Antics
Schnitzer Auditorium and THE WORKS
Thursday, September 9, 2010
Posted by Eve Connell
The power and joy that is PICA’s T:BA festival partially rests in the range of its offerings-and opening night antics last Thursday proved no different. For this festival reveler, it doesn’t get much better than seeing Carlos Kalmar in action (from a prime vantage point at the Schnitz) leading the Oregon Symphony through a program of opera, Gershwin, and McGarrigle (courtesy of Rufus W, and with support from a few of our local celebrity darlings) and then hightailing it to THE WORKS for a pulsating/pounding Japanther show complete with shadow puppetry and a small mosh pit. A few of my favorite things indeed.
The Oregon Symphony presented excerpts from Rufus Wainwright’s first opera Prima Donna, an inspired love and loss drama featuring soprano Janis Kelly (though it was the unknown maid who sang Act II, Scene 1/ Dans mon pays de Picardie who really got me going). The opera rolled along pleasantly with emotional dips, spins, and turns. Rufus does it again, and with Kalmar and his crew, Prima Donna was indeed a delight.
The eclectic mix found in the second portion of this show offered up usual Rufus gems like my Judy G. fave Do It Again. (Please. Do.) and Cohen’s Hallelujah. Classical surprises included two Berlioz pieces. Including local luminaries Thomas Lauderdale and Storm Large for a couple of ending numbers forced the event to gala status, which felt a bit goofy for a moment, but proved to be exactly the right thing to do.
And, then, merely minutes later across the river at THE WORKS, the crowd queuing up to get into the free Japanther show created a totally different energy. This buzz, quite different from the downtown scene at the Schnitz, was revving up to a higher pitch. A packed house. Lots of teens. Many west side stragglers. An edgier vibe. All waiting for some action. On the stage. Now. When it finally began, people moved, jumped, wiggled. We just couldn’t help ourselves. This high-energy band offered its best-a best that included great beats, a special blend of humor/aggro, and whimsical shadow puppets traversing the paper ‘screen’ in front of the band. While we caught glimpses of the actual musicians, to me they felt removed from the performance in a strange way. I would have liked the screen and projections to happen behind the band so we could see them pounding away, too. I surely would have danced more with that kind of arrangement.
Oh, what a night! The diversity of performers and pieces set the tone, and certainly bodes well for the rest of the festival. T:BA:10, bring it. 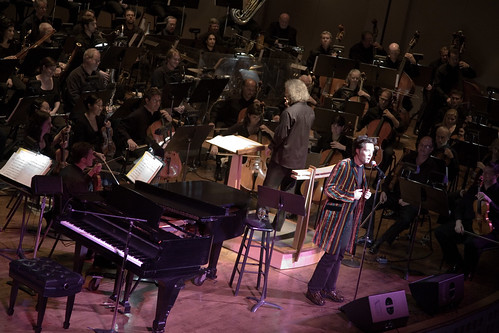