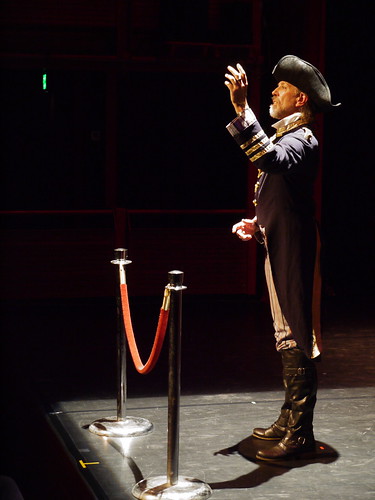 As Dayna Hanson’s presentation at TBA of her new dance theater piece “Gloria’s Cause” is billed as a “work in progress” it doesn’t seem fair to do a full-on critical review of what is essentially an um, glorified rehearsal.

As a nod to its unpolished spirit, here are instead some not-so-random notes on this not-quite-finished performance art project:
• A rock opera about the American Revolution? Well, kind of. Hanson and her multi-culti crew of capable performers has fashioned a distinctively rock flavored musical fueled by early American ideals and rhetoric.
• So yeah, it does seem like “Rent” or “Hair” with special appearances by the Founding Fathers.
• Potential central theme: “What is equality?”
• Interludes of characters talking over one another just like in Robert Altman films. Except interspersed with occasional bits lukewarm rock and Frank Zappa/Primus inspired freak funk .
• It’s a musical that needs less music. Although admirably performed live with the troupe trading instruments among the nine of them, the music was the show’s weakest element. Having a live band onstage is tricky in an intimate theater setting–it’s presence was often too loud and distracting.
• Consequently, the tap infused dance segments sans music sounded the best.
• Was relieved to find that a recurring character was intended to be the American bald eagle, though its mask looked more like a chicken or Howard The Duck. 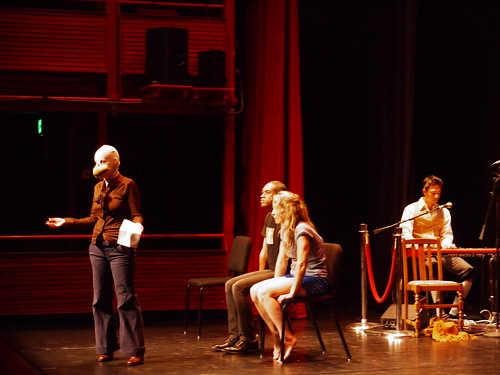 • The bit about the writing of the Declaration of Independence a la “Schoolhouse Rock” was pretty funny.
• As was the animatronic George Washington and robot dance sequence which was the highlight of the show.
• In the end: the various sequences do not feel well connected but the stitching should be smoothed out by the time the show makes its proper premiere. Not sure if this distinctively contemporary telling of history really works, but it does have potential. Like America, “Gloria’s Cause” it’s just not quite there yet.
Dayna Hanson’s “Gloria’s Cause” at TBA repeats tonight and premieres at On the Boards in Seattle in December..