HOT MAN IN COMFORTABLE CLOTHES HAS ALMOST NO EGO

Jerome Bel, Cedric Andrieux
Posted by: Forrest Martin
Photo by: Rio
The lights dimmed, a man walked onstage to no fanfare, and I knew I would be at least decently satisfied because the stage direction was fantastic. Nothing but a fair, exceedingly handsome man with a soft, even voice and a faint French accent, in loose electric blue gym pants tucked in to brilliantly white socks, topped with a time-worn, loose-but-still-form-fitting vintage red t-shirt and a slouchy grey hoodie. I suddenly felt that comfortable in my own white t-shirt and hoodie, and was especially happy that I’d only just showered fifteen minutes before. 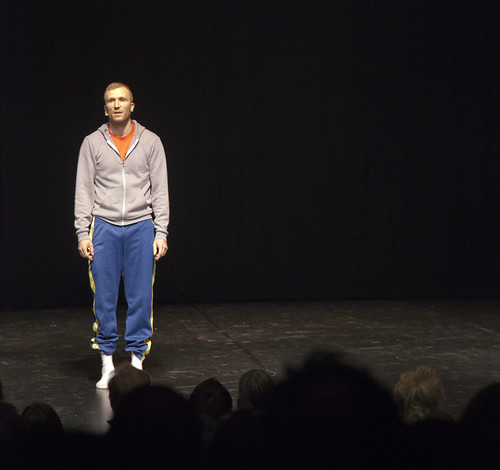 He introduced himself as Cedric Andrieux, 33 years old, born the same year as myself. “Am I perceived as this much of an adult man?” I wondered. If so, how strange. But I began to reorganize my self-image thusly.
He spoke to the audience with such measured consideration that you began to feel a very quick, very false intimacy quite effortlessly. Apparently, he was going to be still and sincere with us, which can be a disaster if there’s any indication of hesitation. Fortunately for our nervous, fidgety selves, he carried it off. We still coughed, and dropped heavy objects (twice?), and forgot to silence our cell phones before making musical spectacles out of turing them off (dee-dee-dee-dee, di-de-da-da, doo-doo-doo-dee-dum), but we learned to trust him and lean into the story he told of his life of awkward starts and desires; all the while very aware of how quiet it was between phrases. Until we weren’t.
As he told us about half-heartedly auditioning for dance school in France, and eventually making his way – almost effortlessly, as if a spectator to his own life – to becoming a dancer in Merce Cunningham’s legendary dance troupe, he would outline some of the complicated dance steps he had relationships with by demonstrating them to us, also without music. Sometimes these bouts were long. Just the sound of his breath in the mic, or, in the instance of demonstrating a tedious pose he struck for art students to supplement his income in NY, the involuntary closed-throat belches that would rise and normally be inaudible if there were not a microphone right there, strapped to the right side of his head. Andrieux confided that music was entirely inconsequential to him in Merce’s troupe, as it was secondary to the dance. They always practiced in silence, and only ever heard the piece they were to perform to on the day of the show. The longer and less narrated the example that he re-performed was, the more likely I was to forget where I was and what in god’s name he was doing.
Things were laid even more bare when he pulled out a sad, limp, pink and white tie-dyed unitard and told us, without irony, that this is what he was directed to wear. Following this presentation was that of the dancer’s belt; essentially a camel colored thonged jock strap with padding in the front. When Cedric announced that he would now change into these, I fully expected him to do this in front of us. The bar for self-revealingness had already been set, but instead he retired to the wings to change suit. I could not help but feel, now, that there was something neutering about being put into a unitard. As he observes, it hides absolutely nothing (not a problem here; see title), and it made me respond to him much differently than I had before the change. I suddenly felt that he must be very uncomfortable and/or self-conscious (he confirmed the latter), and I found myself sucking in my own stomach as I heard (again, uncomfortably) the sounds of his body thudding against the floor, and exertion escaping his mouth into the nearly soundless room we had learned to seat ourselves in. 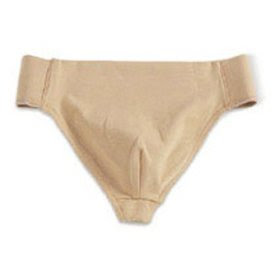 The last outfit change was even stranger; the same red shirt as before, but now paired with dark jeans and nike high tops. Street clothes, representing the last chapter, now that he had left the Cunningham troupe and began experimenting with the styles of other choreographers. It opened up his world, he told us, to be much looser, and generally in less pain, and he recreated a performance choreographed by Jerome Bel that only required thirty dancers on stage to subtly emulate whatever pop song was playing with no special “dance” movements. The song he chose to re-perform for us was by the Police, “I’ll Be Watching You.” The song began – loudly, and in actuality, over the real house speakers – and after thirty seconds he walked out from the wings to the front of the stage and just looked at the audience (the theater was quite small and no one was very far from him, and we hadn’t heard any artificial sound the ENTIRE TIME. And it was Sting singing.). Next, a rack of overhead lights snapped on behind Andrieux and bathed us all in bright amber light. He continued to regard us innocently and intently, but now, for the first time, warmly as well. A smile would grow on his lips and he would not edit it, instead he let it grow all the way, and this seemed almost pornographic to me. Sometimes he would even laugh, still staring at whomever was inspiring the feeling, and I became jealous of that person (see title). Really, it was all too much. The song, the sincerity, the intimacy, the lights and fanfare and glory. My mind was turning inside out. He had introduced us to a certain world with certain rules and now, at the end, was telling us something entirely different. That it was okay to embellish for the sake of championing a feeling.
The finale, you could say, followed shortly thereafter as he describes later happening across Jerome Bel in person on a train (who is very curious about his experiences with Merce Cunningham), and, at Jerome’s behest, beginning an email correspondence with him as backstory for a piece that Bel would be directing. The piece, of course, is this piece, and my mind folded in half once again at the vulnerability of it all.