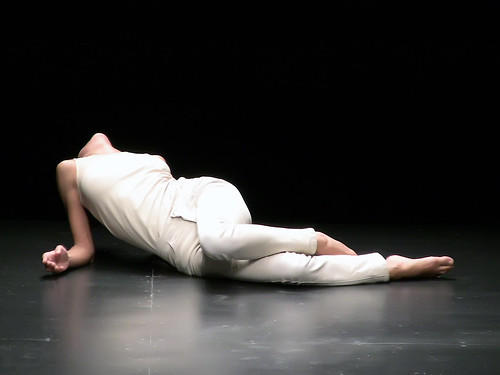 Maria Hassabi, SoloShow
Posted By: Robert Tyree
When I heard Cathy Edwards got slack for “exhausting” us last year and read the Mercury’s repeated, brutal, and unintelligible flogging of Meg Stuart’s Maybe Forever (a piece I revered), I was afraid that there might be no meat with our gravy in this year’s festival. Fear assuaged. Maria Hassabi gives us something to chew on. SoloShow is challenging, expansive, and rewarding.
I’m amazed that I was amazed that there was no talking in a dance piece. Instead, we get bodies, dozens of them. We get bodies that shake out of the muscular impossibility of stillness, as if in protest at some unnatural fixation. We get a body that suddenly transforms into a completely new one with lone addition of a face looking at the audience. Some bodies make themselves felt, remarkable tactile and supple, impacting space and generating vastly different powers from one stillness to the next. And then a sudden flatness as I see her face and body in a way that refers my mind to vaguely similar images that I might have seen in magazines, fashion, porn, advertisement, dance promotion, sculpture. Who knows, but this is not the same body. It does not have the same flesh, dimensions, or qualities. 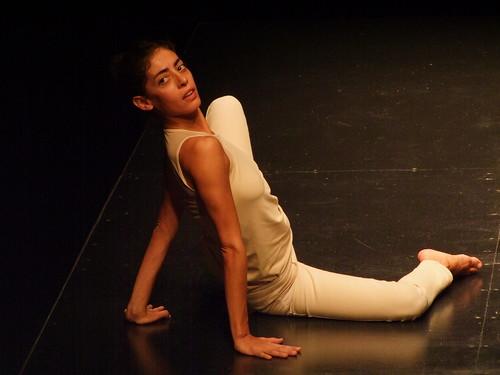 Has the body died once I code it as representative? What happens when that body slams loudly onto the floor, suddenly announcing a previously unknown weight? Is it the same body?
This is dance employing its formal elements to mine some core themes. It was spiritual for me, that’s the kind of terrain I found it inhabiting. I’m certainly grateful for the fine composition of space and time, the clarity of the costume, lighting, and sound design, and the opportunity for a focused engagement with the timeless powers inherent to bodies that forever infect us with wonder despite our many deaths in meaning.
At the end of the performance, someone next to me said, “That was the most boring performance I have ever seen.” Well, as they say, ‘Only boring people get bored.’ I fear for any culture that has lost it’s ability to sense what a body creates. There’s no reason why such a culture would survive.
Not the most relevant, but good enough for a shameless re-blog (from: newshelton.com/wet/dry/)
“The body can by the sole laws of its nature do many things which the mind wonders at.
Again, no one knows how or by what means the mind moves the body, nor how many various degrees of motion it can impart to the body, nor how quickly it can move it. Thus, when men say that  this or that physical action has its origin in the mind, which latter has dominion over the body, they are using words without meaning, or are confessing in specious phraseology that they are ignorant of the cause of the said action, and do not wonder at it.”
Spinoza, The Ethics, 1673